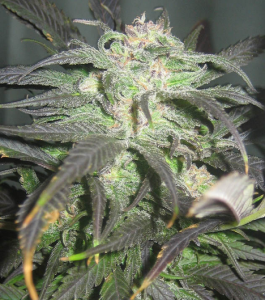 Biddy Early is named for a 19th century woman accused of witchcraft, whose story became the subject of folk ballads and entered Irish legend. Magus – from the Latin for “priest” or “sorcerer” – felt kinship with Biddy Early’s plight given the similarity between the witch hunt hysteria in times past and the current war on drugs.

Biddy Early is the first variety that Magus genetics specifically formulated for outdoor gardening in temperate regions. Although an even mix of sativa and indica, this plant exhibits the strong lateral growth typically seen in sativas. Biddy likes to branch out. The branches are very elastic and pliable, easily trained or tied like vines to suit the available space. Outdoors, this suppleness makes the plant “storm proof” or resilient to harsh weather.

Biddy Early shows her talents outdoors, but may create trouble when grown indoors eaither for bud or as mothers for cloning, due to her low flowering trigger. Biddy often flowers prematurely if stressed by a lack of sufficient light, nutrients, or root space.

At maturity, Biddy Early is a medium-sized plant that delivers a respectable yield of sugary sweet colas. The buzz mixes sativa headiness and indica power for a somewhat unbalancing broomstick ride into an enjoyably floaty high. Warm ears are a common side effect.

Ever smoke or grow Biddy Early? Tell us about it in a comment below!