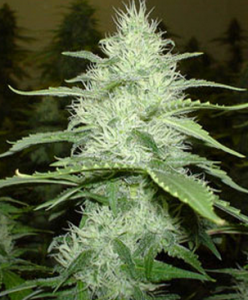 Also known as Peacemaker, the White Shark produces heavy colas with a resin coverage that rivals White Widow. A mostly indica plant, the budy buzz is potent, often making this a one-hitter quitter. Also well known for its medical properties, White Shark is a strain of choice for those who suffer from chronic pain.

The Super Skunk, Brazilian and South Indian parents have given White Shark the stereotypical indica appearance, with fat, serrated leaves and dense, chunky colas on a squat, easily manageable plant. The powdery buds develop the traditional Halloween orange hairs that darken to brown as the crop reaches maturity.

While this variety can be grown outside in mild temperate climates where the growing season allows for a 10-week finish, White Shark is recommended as a hydroponic plant indoors. Other methods, including a sea of green style garden, can also produce winning yields. A serious buzz with a pungent but distinclty fruity taste, this strain is best isndulged in when there is time to daze and doze afterwards.

Ever smoke or grow white russian? Tell us about it in a comment below!