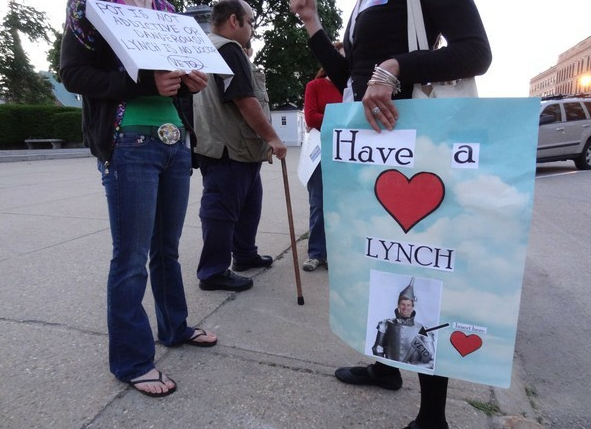 About 40 medicinal marijuana advocates held a candlelight vigil at the Statehouse in an effort to educate the public about the need for the law to help sick people cope with their diseases legally.

The New Hampshire Students for Sensible Drug Policy and other advocates of the law put the vigil together in a couple of days as a way of showing Gov. John Lynch, D-Hopkinton, who has vetoed other versions of the law in the past, that there was support for the bill. Lynch, in the past, has said he still has concerns about the bill.

The breezy evening didn’t make it easy for the candles to stay lit. But advocates hoped they were able to get their message across: That changes to the law are needed to protect and help sick people in New Hampshire.

The current version of the law – SB 409 – is in conference committee in order to clean up some of the language in the bill. Advocates of the law believe this is their best year yet to have it re-implemented in New Hampshire, since both the House and the Senate, governmental bodies controlled by Republicans, have worked with Democrats to put together a bill that could be supported by both parties as well as law enforcement.

Jen Hall, the president of New Hampshire Students for Sensible Drug Policy, said the group was successfully organizing young people around the state to understand that there is another side the marijuana issue.

“That’s the most important thing too, getting to the younger kids,” she said. “We didn’t learn anything about drugs beyond D.A.R.E. We’ve got no defense. We’ve been forced this false knowledge that they think it won’t help them. It’s a good way to get them empowered about something.”

Hall said the group was having conversations with students about the medicinal properties of the drug and addiction problems with other drugs. She said young people are seeing those problems because they weren’t properly educated about drugs.

Kirk O’Neil, another advocate, said as long as medicinal marijuana is illegal, fewer people will use the natural remedy to help them recover because they’ll be worried about urine tests and jobs and other issues. The key is legalization of the process, so those employees who are sick are protected.

Gregory Pawlowski, another supporter of the law who also works with Hall, said supporters were reaching out to gubernatorial candidates about the issue. So far, Democrat Jackie Cilley, a supporter of the laws when she was in the state Senate, supports the bill; Republican Kevin Smith has come out strongly against. Activists believe that Republican Ovide Lamontagne will give them a fair hearing before coming to a decision.

All the advocates said they would be pressing the case with voters and citizens after the bill gets out of conference. They believe the revised bill will pass the state Senate and then be sent to the governor. With Lynch’s previous opposition, that’s when the hard work will begin.

“This is just the beginning of a series of events communicating with the community,” Pawlowski said.

But even if the bill does pass, that’s not the end of the issue.

O’Neil said there was education and training needed on how to properly handle, grow, and consume the drug. He hopes to set up classes sometime after the bill passes, in order to make sure that users of medicinal marijuana have the knowledge they need. It’s currently illegal, for example, to teach anyone in a course how to properly grow marijuana for medicinal purposes.

“There’s still a lot of work that needs to be done,” he said.

Advocates from other states have also started reaching out to New Hampshire advocates grilling them on how they’ve been able to get the laws passed through a Republican controlled House and Senate.

“It’s liberty,” Hall said. “And personal responsibility in a lot of ways too.”

The advocates hope to help out those states to create laws that could have bipartisan support in their legislatures.