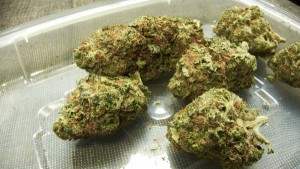 It’s not everyday that a nearly 24-pound bundle of drugs smashes into your family’s carport.

Maya Donnelly awoke to what sounded like monsoon thunder in the early hours of the morning, but dismissed the crash she heard as a typical storm noise and went back to sleep, according to Nogales International. Later that day, she walked outside her Nogales, Ariz., home to find that a plastic-wrapped package of marijuana had fallen from the sky, pierced her family’s carport and destroyed their dog’s unoccupied kennel.

“I went out to investigate, and sure enough, I looked up to see the hole, and then my eyes trailed down and the big dog’s house was destroyed. It made a hole in that hard plastic doghouse, and the bundle was inside,” Donnelly said.

With the family’s house only a few hundred yards from the U.S.-Mexico border, Donnelly and her husband Bill said the police told them the bundle likely fell from an ultralight aircraft that crossed the border and dropped one of its deliveries too early.

Police said the family will have to pay about $500 to repair the damages caused by the nearly $10,000 marijuana package.