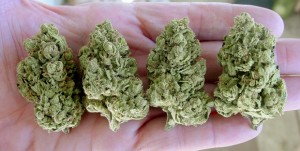 Since California first legalized medical marijuana in 1996, 22 additional states, along with Washington, D.C., have followed suit. We are now very near to a time where medical marijuana could be legalized nationwide while recreational legalization might not be very far behind it. As the presidential race starts to heat up it is important to know what they all think about the plant we all love.

Since California first legalized medical marijuana in 1996, 22 additional states, along with Washington, D.C., have followed suit.

Bernie Sanders Favors Total Legalization: There aren’t too many candidates in this year’s election that are willing to take the previously taboo stance of calling for marijuana’s full legalization, both medically and recreationally, at the federal level, but this year Democratic Party candidate Bernie Sanders has done just that and is the clear front runner for cannabis.

Donald Trump favors Legalize medical marijuana, recreational maybe. Hard to say exactly what his plan would be for this at this point as he hasn’t said much.

Ted Cruz: Supports states rights not federal legalization and would like to see the states continue to advance as they currently are.

Hillary Clinton is in favor of states rights to medical marijuana but not much more. In favor of ongoing research to learn more.

Marco Rubio – Florida senator Marco Rubio, one of the leading presidential candidates for the Republican Party, has a generally negative approach to marijuana’s momentum. In fact, if he became president he’d consider using his “Marcomentum” to stamp out recreational use of the drug entirely. When questioned on Meet the Press in August 2015, Rubio clearly stated that he’d enforce the federal law when it comes to recreational marijuana. He’s previously been on the record suggesting that there’s no responsible way for recreational marijuana to be used.

Jeb Bush – Former Florida governor and Republican presidential hopeful Jeb Bush joins a very crowded field of candidates that still stand mostly against legalizing marijuana. Bush has generally avoided discussing marijuana during debates, but he’s taken a pretty one-sided stance against the substance. It is worth mentioning that Bush has somewhat supported compassionate use of medical marijuana, but in general he views marijuana to be a gateway drug regardless of whether it’s for medicinal or recreational purposes.

Ben Carson – Republican presidential candidate and retired neurosurgeon Ben Carson takes one of the toughest stances on marijuana among the remaining candidates. While speaking with Glenn Beck in October, Carson announced, without hesitation, that he would “intensify” the war on drugs, and that he completely disagreed with the idea of legalizing recreational marijuana. Carson went on to argue that he believed marijuana was a gateway drug to considerably more harmful and/or addictive and damaging substances. The one ray of sunshine for marijuana supporters is that Carson does believe marijuana could be helpful in instances of medical compassionate use.

John Kasich – Ohio governor and Republican presidential hopeful John Kasich joins Rubio, Bush, and Carson among those who offer very limited support of marijuana as a whole. Following the defeat of Issue 3 in Ohio this past November, which would have legalized medical and recreational marijuana, Kasich went on the record with Stephen Colbert on The Late Show by reinforcing his belief that recreational marijuana “is a terrible idea.” Kasich’s main concern revolves around the perceived double-standard of telling kids not to do drugs, but that marijuana is OK.