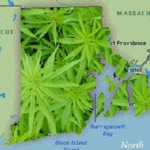 If you have a medical marijuana registry identification card from any other state, U.S. territory, or the District of Columbia you may use it in Rhode Island. It has the same force and effect as a card issued by the Rhode Island Department of Health.