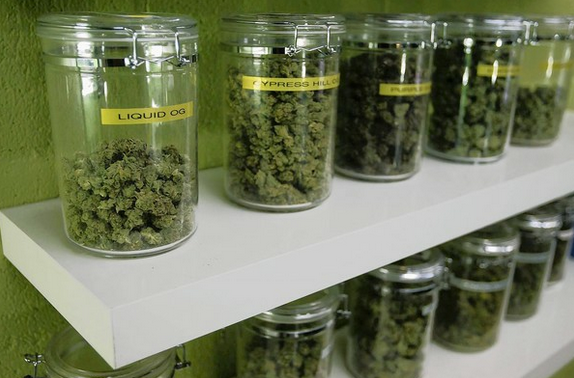 A majority of California voters remain opposed to legalizing marijuana, according to results of a new poll.

Eighty percent of respondents said they support doctor-recommended use of marijuana to help deal with severe illness, a USC Dornsife/Los Angeles Times poll found. But only 46% said they support legalization of “general or recreational use by adults,” while 50% said they oppose it. Those against using pot were more adamant in their position, with 42% saying they felt “strongly” about it, compared with 33% for proponents.

The Bay Area was the only region of the state where a majority — 55% — favored legalization, compared with 41% in Southern California and 49% of voters in Los Angeles County. There was a pronounced drop-off in support with age, with 58% support among those in their late teens and 20s, 51% for those between 50 and 64, and 28% of respondents older than 64.

As for political affiliation, 28% of Republican and 50% of Democratic respondents said they favored the idea of legalization. Independents gave the idea a boost, with 60% saying they favored it.

The survey indicated opinions have not measurably changed since voters defeated the Proposition 19 legalization initiative in 2010 by similar margins. And oddly, given the state’s long role as a leader in marijuana decriminalization and cultivation, support for sanctioning its general use here appears to lag behind the sentiment in the rest of the country.

Dan Schnur, director of the Jesse M. Unruh Institute of Politics at USC, said the poll numbers suggest that California voters are concerned about the way the Compassionate Use Act, passed in 1996 to permit use of medical marijuana, has been carried out.”They like the idea of providing marijuana for medical use, but they’re worried that the law is being abused,” he said.

The new poll of about 1,000 registered voters taken May 17-21 statewide indicated that many more voters used marijuana “recreationally” than the 3% who said they used it as medicine. Just less than 38% said they had used pot for pleasure at least once in their lives — and 9% said they had done so in the last year. The questioners did not ask whether those who used the drug recreationally acquired it on the street or with a doctor’s recommendation from a dispensary. The poll’s margin of error is 3.5 percentage points.