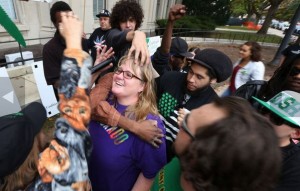 A coalition of groups advocating for marijuana legalization in New Jersey have announced plans for a “NJ Spring Smoke-Out” rally outside the Statehouse in Trenton this month.

The March 21 demonstration supports legalization and “any progressive measures on marijuana,” according to a Facebook page for the event.

A “Million Joint March” is scheduled to begin at 2 p.m. at the NJ Transit River Line Station near the Trenton Transit Center and proceed to the Statehouse.

At 4:20 p.m. the group will “smoke out” the Statehouse by lighting up across the street from the main entrance, according to organizers.

A similar event held outside the Statehouse in October had more than 250 participants. About 75 people smoked marijuana in protest during that rally.