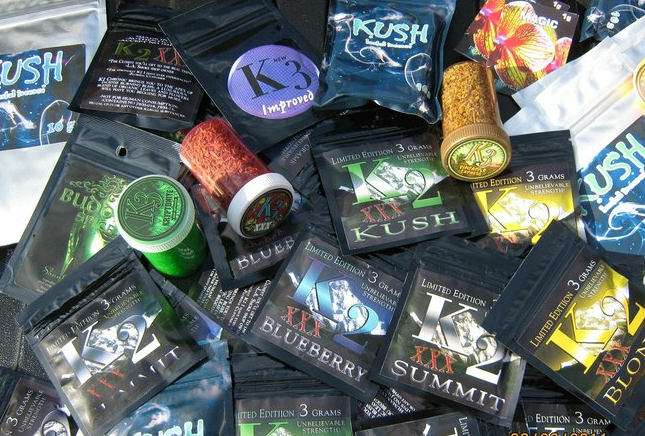 Michigan lawmakers took steps Wednesday to ban so-called synthetic marijuana, while concerned parents hit the streets to urge stores to keep it off shelves as momentum continued to build against a product linked to health problems and violent behavior.

Even before lawmakers acted, Detroit-area communities and some counties have done so on their own this week to prohibit products known as K2 and Spice. Synthetic marijuana is a mix of dried herbs and spices sprayed with chemicals and smoked by users.

Police in Roseville made arrests Wednesday after inspecting a shop and finding owners had violated a new ban in Macomb County. Meanwhile, in Oakland County, concerned parents in the Clarkston area got 10 more businesses to agree not to sell synthetic marijuana. The pledge is taped to windows at gas stations, country markets and corner stores.

“I didn’t know this stuff existed six weeks ago,” said Andrea Schroeder, a mother who led the store-to-store effort, 40 miles north of Detroit. “Because it’s legal, kids think it’s OK. They think, ‘It can’t be that bad or they wouldn’t let us buy it.’ The effects are frightening.”

The recent death of an 18-year-old Oakland County man has been linked to synthetic marijuana use. Another young man charged with bludgeoning his father to death with a baseball bat had used it before the attack, according to court testimony.

At the state Capitol, the House unanimously approved legislation that would allow the state to identify and eliminate such drugs. The products would be temporarily categorized as a controlled substance.

The measures list chemical classifications that are prohibited and grants Michigan State Police authority to remove those drugs from stores by July 1 if businesses haven’t done so. The legislation moved on to the Senate.

In December, University of Michigan researchers who conducted a national survey said one of every nine high school seniors reported using synthetic marijuana in the previous 12 months.

“There seems to be horror stories coming out about people affected by this,” said Lloyd Johnston, the study’s principal investigator.

At least 40 states have banned synthetic cannabinoids, as synthetic marijuana is formally known, according to the National Conference of State Legislatures.

The city of Detroit and Wayne County issued emergency orders Tuesday banning sales, following Macomb County. In western Michigan, Kent County authorities noticed a rise in use two months ago, including by a 12-year-old, but a similar local prohibition is not in place.

At least 126 cases were reported to the Michigan Poison Control Center, from January through March. Symptoms include elevated heart rate, tremors and hallucinations.

A trade group for retailers, the Associated Food and Petroleum Dealers, said it would revoke the membership of any Michigan store caught selling synthetic marijuana where there’s a ban. Others would be encouraged not to sell it.

“It’s garbage,” said Auday Arabo, the group’s president. “There are folks there who value dollars more than human life.”

On May 25, Oliver Smith was found dead on the beach of an inland lake. An autopsy found a connection to synthetic marijuana, family attorney Scott Weinberg said.

“A manmade drug took him from us,” Smith’s family said in a statement to lawmakers this week. “As a result of your legislation, immeasurable suffering and senseless death can be avoided.”