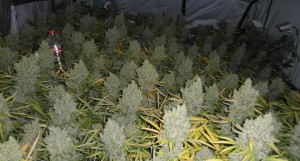 Compared to other recreational drugs — including alcohol — marijuana may be even safer than previously thought. And researchers may be systematically underestimating risks associated with alcohol use.

Those are the topline findings of recent research published in the journal Scientific Reports, a subsidiary of Nature. Researchers sought to quantify the risk of death associated with the use of a variety of commonly-used substances. They found that at the level of individual use, alcohol was the deadliest substance, followed by heroin and cocaine. 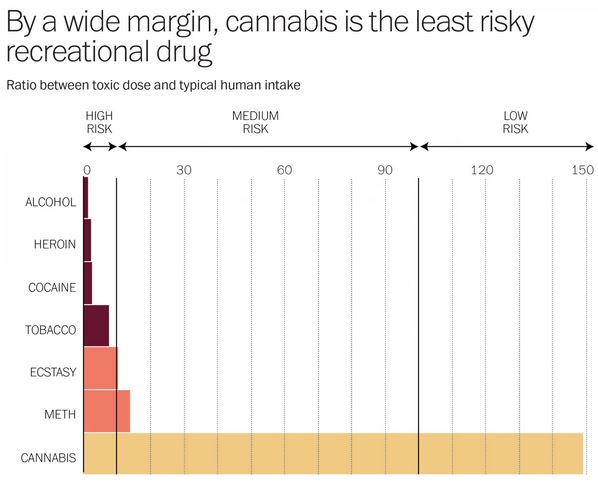 And all the way at the bottom of the list? Weed — roughly 114 times less deadly than booze, according to the authors, who ran calculations that compared lethal doses of a given substance with the amount that a typical person uses. Marijuana is also the only drug studied that posed low mortality risk to its users.

These findings reinforce drug safety rankings developed 10 years ago under a slightly different methodology. So in that respect, the study is more of a reaffirmation of previous findings than anything else. But given the current national and international debates over the legal status of marijuana and the risks associated with its use, the study arrives at a good time.

It’s important to note here that “safer than alcohol” doesn’t mean “safe, full stop.” Indeed, one of the more troubling lines of thought I see in some quarters of the marijuana legalization movement is that because marijuana is “natural,” or because it can be used as (non-FDA approved) “medicine,” it is therefore “safe.”

But of course, rattlesnake venom is natural too, and nobody would call that safe. And prescription painkillers are both medicinal and responsible for tens of thousands of deaths each year.

There are any number of risks associated with marijuana use. Most of these risks involve mental health issues, and most increase the earlier you start using and the more frequently you use.

What is unique is how these substances are treated under the law, and particularly the way in which alcohol and nicotine essentially get a free pass under the Controlled Substances Act, the cornerstone of the nation’s drug policy. This study’s authors note that legislative classifications of psychoactive drugs often “lack a scientific basis,” and their findings are confirmation of this fact.

Given the relative risks associated with marijuana and alcohol, the authors recommend “risk management prioritization towards alcohol and tobacco rather than illicit drugs.” And they say that when it comes to marijuana, the low amounts of risk associated with the drug “suggest a strict legal regulatory approach rather than the current prohibition approach.”

In other words, individuals and organizations up in arms over marijuana legalization could have a greater impact on the health and well-being of this country by shifting their attention to alcohol and cigarettes. It takes serious effort to fight against the dangers of marijuana use by day and then go home to unwind with a glass of far more lethal stuff in the evening.