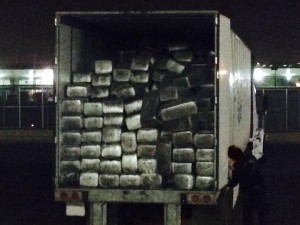 Border patrol officers found more than 15 tons of marijuana valued at nearly $19 million in a tractor-trainer headed from Mexico to California.

The Los Angeles Times reported that the marijuana was seized earlier this week from a truck supposedly carrying a shipment of mattresses and cushions at the Otay Mesa border crossing.

Authorities said that agents seized nearly 1,300 packages of marijuana inside the truck’s trailer. The marijuana weighed more than 31,000 pounds total and was valued at $18.96 million.

The truck was driven by a 46-year-old Mexican national who has since been arrested. The seizure is said to be one of the largest ever at a U.S. border crossing.