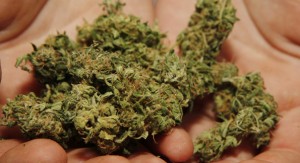 Ask Willie Nelson about his love of marijuana and he will likely direct you to his memoir, the awesomely titled Roll Me Up and Smoke Me When I Die: Musings From the Road. That, or he’ll delightfully tell you about that one time he smoked pot on the roof of the White House. Soon enough, the legendary singer-songwriter will have something new to boast about: his very own brand of weed.

Yes, after being a longtime proponent and enthusiast of marijuana, Nelson is looking to get into the business of actually selling it. The product is called Willie’s Reserve, and it could be available to the public as early as 2016. It will also be distributed through physical stores, which Nelson and his family hope to open up across the US in states that’ve legalized marijuana. (For reference, Colorado’s estimated legal weed market is expected to reach $1 billion next year. Whew.)

According to an interview with Willie’s Reserve spokesperson Michael Bowman, the business is not just some fun, hobby-type venture, but “a culmination of Willie’s vision, and his whole life.” He adds:

Willie has spent a lifetime in support of cannabis, both the industrial hemp side and the marijuana side. He wants it to be something that’s reflective of his passion. Ultimately, it’s his. But it was developed by his family, and their focus on environmental and social issues, and in particular this crazy war on drugs, and trying to be a bright light amongst this trail as we’re trying to extract ourselves from the goo of prohibition.

Really he wants it, at the end of the day, to envelop what his personal morals and convictions are. So from the store itself to how they’ll work with suppliers and how things are operated, it’s going to be very reflective of Willie’s life.

Bowman notes that in addition to signature strains grown under the 81-year-old musician’s guidance, Willie’s Reserve will sell other people’s products. Below, watch Nelson recall his days spent lighting it up at the nation’s capital.

Newer PostWorld Cannabis Week Returns to Denver
Older Post16,000 Marijuana Plants to be Given Out in Washington D.C.