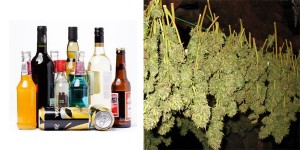 Worrying about teen drinking and drug use has kept many a parent up at night. With marijuana becoming increasingly available and legal in some parts of the country, the question has taken on new urgency: If teens are going to experiment, which is safer, booze or pot?

“The first answer always has to be neither,” Dr. Aaron Carroll, a professor of pediatrics at Indiana University School of Medicine, told CBS News. But then he acknowledges they’re not exactly equivalent — and he considers alcohol much more dangerous.

Carroll wrote a provocative piece for the New York Times exploring what’s known about the risks of these two popular but easily abused substances. And while doesn’t advocate underage users trying either one, he says it’s clear that overall, alcohol causes a lot more harm.

“After going through all the data and looking at which is more dangerous in almost any metric you would pick, pot really looks like it’s safer than alcohol,” he said. “So I guess if I had to choose, that would be the answer.”

Though many people associate drugs with crime, Carroll notes that most of the criminal activity tied to marijuana has to do with illegal distribution, not violence committed by people who smoke it.

“On the other hand, the number of crimes that are committed that have some sort of alcohol component related to them are massive — hundreds of thousands a year, if not more,” he said. “It’s far worse than what’s going on with pot.”

Violent assaults, in particular, are often fueled by alcohol. In contrast, Carroll says research shows rates of interpersonal or domestic violence are actually “lower in people who smoke marijuana than people that don’t.”

Also tipping the scales against drinking is the fact that 1,800 college students die each year from alcohol-related accidents and almost 600,000 are injured while under the influence of alcohol, according to the National Institutes of Health.

A study published last year, looking at data from more than 7,400 U.S. high school seniors who said they had used alcohol or marijuana at least once, found drinking alcohol was associated with more unsafe driving, damage to relationships with friends and romantic partners, and regret about actions while under the influence of alcohol, especially among females.

“We always worry about pot as a gateway drug,” Carroll said, “but research shows us that about 9 percent of people who experiment with pot will become dependent or abuse it. The percent that later become dependent or abuse alcohol is greater than 20 percent. So more people who use alcohol are actually going to have a problem with it later in life.”

Why is alcohol more socially accepted, despite all the evidence stacking up against it? Carroll thinks that’s an accident of history — because it’s been around and legal for a longer period of time. “It’s hard to argue from data or from actual science that that’s the way it should be,” he said.

“We have to have a conversation. There are risks and benefits, and in moderation everything is fine.”