The legislation will go to Gov. Maggie Hassan for signature after minor differences are worked out.  New Hampshire stands to become the 19th state to legalize use of marijuana to relieve pain.  The Granite State is the one place in New England that has yet to enact medical marijuana legislation. 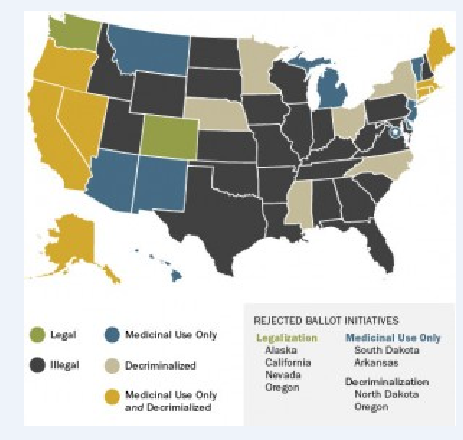 Medical marijuana legislation has also moved through the Illinois Legislature, and now awaits the signature of Gov. Pat Quinn.  Illinois would become the 20th state.

Medical marijuana has enjoyed a not-always-peaceful existence.  U.S. attorneys in Oregon and California have warned that possession of cannabis is still against federal law — violating the Controlled Substance Act — and have threatened landlords of marijuana dispensaries with confiscation of property.

Voters in Los Angeles, on Tuesday, voted to cap at 135 the number of medical marijuana dispensaries permitted to operate in America’s second largest city.  The shops allowed to stay open were those operating before a city-ordered moratorium in September of 2007.

The moratorium didn’t work, and an estimated 850 medical marijuana shops currently operate across the City of Angels.

In Seattle, the Drug Enforcement Administration has warned a property owner that “a marijuana enterprise under your management or control” is operating within 1,000 feet of “an educational facility or other prohibited area.”  It warns the owner that sale and distribution of marijuana remain illegal and subject to both criminal and civil enforcement actions.