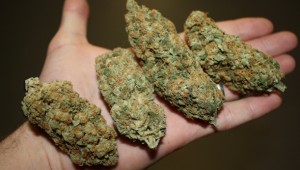 A 65-year-old woman has been arrested after investigators recovered over 300 pounds of weed during a traffic stop.

Agents with the Drug Enforcement Administration alerted the Tennessee Highway Patrol that a couple of suspects implicated in a large weed investigation could be in the area.

Shortly after, troopers spotted Berrelleza’s vehicle and pulled her over.

According to an affidavit, Berrelleza consented to a search of her vehicle — at which point 310 pounds of weed was located.

She was arrested for felony possession with intent to sell and is currently being held on a $100,000 bond.