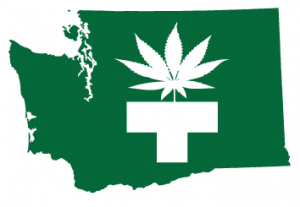 Removes state-level criminal penalties on the use, possession and cultivation of marijuana by patients who possess “valid documentation” from their physician affirming that he or she suffers from a debilitating condition and that the “potential benefits of the medical use of marijuana would likely outweigh the health risks.”

Approved Conditions: Cachexia; cancer; HIV or AIDS; epilepsy; glaucoma; intractable pain (defined as pain unrelieved by standard treatment or medications); and multiple sclerosis. Other conditions are subject to approval by the Washington Board of Health.

Possession/Cultivation: Patients (or their primary caregivers) may legally possess or cultivate no more than a 60-day supply of marijuana. The law does not establish a state-run patient registry.

(123 KB) based on Significant Analysis

Possession/Cultivation: A qualifying patient and designated provider may possess a total of no more than twenty-four ounces of usable marijuana, and no more than fifteen plants. This quantity became the state’s official “60-day supply” on Nov. 2, 2008.

[Editor’s Note: On Jan. 21, 2010, the Supreme Court of the State of Washington ruled that Ballot Initiative “I-692 did not legalize marijuana, but rather provided an authorized user with an affirmative defense if the user shows compliance with the requirements for medical marijuana possession.” State v. Fry

ProCon.org contacted the Washington Department of Health to ask whether it had received any instructions in light of this ruling. Kristi Weeks, Director of Policy and Legislation, stated the following in a Jan. 25, 2010 email response to ProCon.org:

The department has not received ‘any instructions’ in light of State v. Fry. That case does not change the law or affect the 60 day supply. Chapter 69.51A RCW, as confirmed in Fry, provides an affirmative defense to prosecution for possession of marijuana for qualifying patients and caregivers.”]

Do you live in Washington and use medical marijuana? Tell us how it changed your life below!