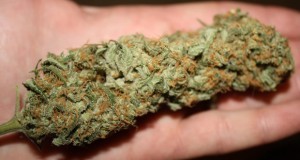 Two men were arrested when troopers found almost 1,000 pounds of marijuana in the back of a U-Haul van during a traffic stop on Interstate 95 in Baltimore Monday night, WJZ reported.

Troopers stopped the van on an exit ramp just after 8 p.m. for an unspecified traffic violation, according to the Maryland State Police.

After noticing something wasn’t right, a trooper brought out a drug-sniffing dog, which alerted to the presence of drugs. A subsequent search of the vehicle found approximately 938 pounds of marijuana in the cargo hold.

The pot was confiscated.

The driver and passenger, identified as Baojie Chen, 23, and Da Fen Xiong, 23, were taken into custody.