Satori is a gentle sativa that open the doors of perception. She’s also a huge yielder, indoors or out, in soil or hydro. Satori seedling grow thin – tall angels with tough main stems. However, height is not a stabilized trait in this hybrid – for example, her outdoor growth varies from 2 to 3 meters (6-9 feet). Growers with headroom or camouflage concerns can prune Satori’s mainstem during early growth, and the pruned plant will cheerfully expand as a short, multi-branch sativa with no loss of yield. The lateral branches reach 30 cm (1 foot) outdoors, never sub-branching unless trimmed for cuttings. During early flowering, her branches stay upright and close to the central cola. Later some support may be necessary because rock-heavy buds develop along the branch tips and bend them down. 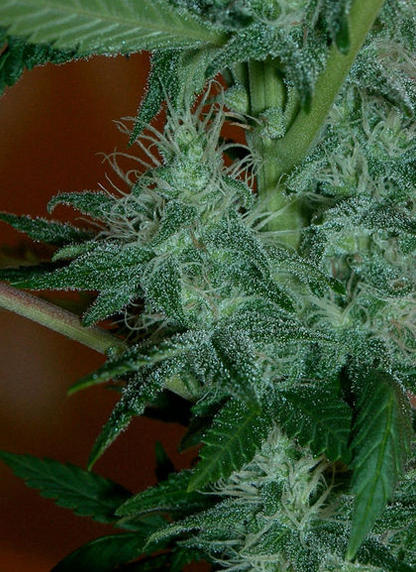 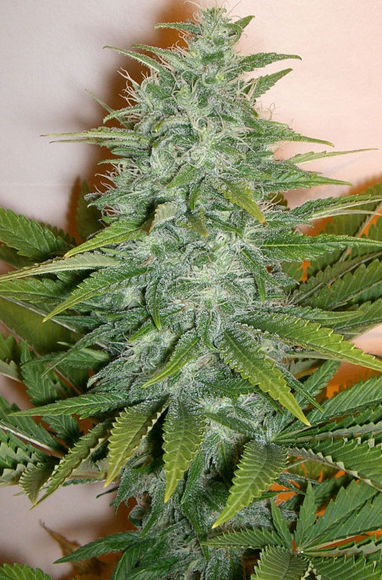 All the buds that sprout from Satori’s tips are first-rate, whether grown on the long central col that takes up 40% of her main stem, or on her very bottom branches. Dense, pagoda-like buds accumulate on branch tips, with still more small buds tucked behind them. Resin production is low until the closing stages of flowering, about 3 weeks before harvest. A this point a coat of bright, glistening resin appears on the conical buds. under a magnifying glass one can already see why Satori is so transcendent – her exceptionally long stalked trichomes remain translucent right up till harvest, preserving high levels of THC. Wise growers will be patient with her long flowering period as her constant production of buds makes bumper harvests routine.

In Japanse, “satori” means a moment of enlightnment in daily life. Satori’s aromatic honey-herbal smoke has a fresh tinge that evokes thyme, oregano and pine. This variety aids access to those bliss moments when seeing, knowing, and loving the world are the same. The breeder recommends Satori for consciousness-expanding experiences and artwork.

Ever smoke or grow Satori Marijuana? Tell us about it in a comment below!