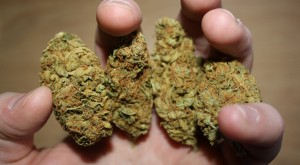 The voter-approved measure took effect on Thursday, making it legal for adults to possess, grow and use limited amounts of pot.

“I am both celebrating and worrying that the law might not be implemented properly,” said Downing, member liaison for the Massachusetts Cannabis Reform Coalition.

The concerns of Downing and other activists stem from public statements by Democratic legislative leaders and Republican Gov. Charlie Baker promising a review and possible changes to the ballot measure, which passed last month by a margin of more than 240,000 votes out of nearly 3.8 million total votes cast.

“The only limitation is how willing they are to tread on the will of their constituents,” said Downing of lawmakers.

Massachusetts is the first U.S. state on the eastern seaboard where recreational marijuana is legal, though Maine will soon follow if a recount upholds passage of a ballot measure there.

The Massachusetts law allows adults 21 and over to possess up to an ounce of pot outside the home, up to 10 ounces inside the home and grow up to a dozen marijuana plants per household. But as it will be at least a year before licensed pot shops are allowed to open, recreational users still have little choice but to buy the drug from illegal dealers.

The wishes of the voters will be respected, pledged Baker, who strongly opposed legalization. But he defended efforts that may lead to revisions.

“It was a 6,000 word ballot question written by the recreational marijuana industry for the recreational marijuana industry,” said Baker, who spoke to The Associated Press from a trade mission in Israel. “So I expect the Legislature will want to deal with things like potency, home rule. What are going to be the rules about where you can locate (retail) facilities and what local control does local government have about that?”

One possibility, Baker said, was extending regulatory deadlines in the law by six months, which could push the start of commercial marijuana sales into mid-2018.

In an eight-page memo sent Wednesday to police departments in Massachusetts, Secretary of Public Safety Daniel Bennett said implementation of recreational marijuana “will create a complex web of different rules,” that law enforcement must navigate.

“Within certain limits, the new law authorizes some conduct that had previously been prohibited. Beyond those limits, however, possession, cultivation and distribution of marijuana remain illegal under state law,” wrote Bennett.

For his part, Downing plans to join other legalization advocates outside the Statehouse on Thursday to celebrate the law formally taking effect. As consumption of marijuana in public places remains illegal, he has no plans to use pot at the rally but would not be shocked if others did as an act of “civil disobedience.”