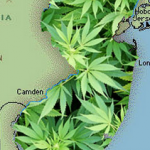 (175 KB)
Approved: Jan. 11, 2010 by House, 48-14; by Senate, 25-13
Signed into law by Gov. Jon Corzine on Jan. 18, 2010
Effective: Six months from enactment [Editor’s Note: S119 was supposed to become effective six months after it was enacted on Jan. 18, 2010, but the legislature, DHHS, and New Jersey Governor Chris Christie did not agree on the details of how the program would be run. The DHHS website FAQs section indicates that medical marijuana will be available to patients in July 2011.]

Protects “patients who use marijuana to alleviate suffering from debilitating medical conditions, as well as their physicians, primary caregivers, and those who are authorized to produce marijuana for medical purposes” from “arrest, prosecution, property forfeiture, and criminal and other penalties.”

Also provides for the creation of alternative treatment centers, “at least two each in the northern, central, and southern regions of the state. The first two centers issued a permit in each region shall be nonprofit entities, and centers subsequently issued permits may be nonprofit or for-profit entities.”

Approved Conditions: Seizure disorder, including epilepsy, intractable skeletal muscular spasticity, glaucoma; severe or chronic pain, severe nausea or vomiting, cachexia, or wasting syndrome resulting from HIV/AIDS or cancer; amyotrophic lateral sclerosis (Lou Gehrig’s Disease), multiple sclerosis, terminal cancer, muscular dystrophy, or inflammatory bowel disease, including Crohn’s disease; terminal illness, if the physician has determined a prognosis of less than 12 months of life or any other medical condition or its treatment that is approved by the Department of Health and Senior Services.

Possession/Cultivation: Physicians determine how much marijuana a patient needs and give written instructions to be presented to an alternative treatment center. The maximum amount for a 30-day period is two ounces.

(385 KB)outlining the registration and application process on Oct. 6, 2010. A public hearing to discuss the proposed rules was held on Dec. 6, 2010 at at the New Jersey Department of Health and Senior Services, according to the New Jersey Register.

(25 KB) declaring that the “Board of Medical Examiners proposed medicinal marijuana program rules are inconsistent with legislative intent.” The New Jersey Senate Health, Human Services and Senior Citizens committee held a public hearing to discuss SCR 140 and a similar bill, SCR 130, on Jan. 20, 2010.

(200 KB) that streamlined the permit process for cultivating and dispensing, prohibited home delivery by alternative treatment centers, and required that “conditions originally named in the Act be resistant to conventional medical therapy in order to qualify as debilitating medical conditions.”

A page on the DHSS website titled “Frequently Asked Questions about the Medicinal Marijuana Program,” accessed on Feb. 22, 2012, stated that the patient registry has not opened yet, but 109 physicians have pre-registered for the program. When the registry opens, the physicians will be able to register patients with DHSS.

Do you live in New Jersey and use medical marijuana? Tell us how it changed your life below!