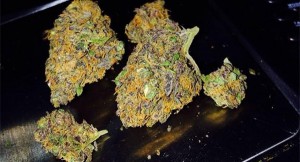 In 2015, 21 percent of Colorado youths had used marijuana in the past 30 days. That rate is slightly lower than the national average and down slightly from the 25 percent who used marijuana in 2009, before legalization. The survey was based on a random sample of 17,000 middle and high school students in Colorado.

“The survey shows marijuana use has not increased since legalization, with four of five high school students continuing to say they don’t use marijuana, even occasionally,” the Colorado health department said in a news release.

The numbers out of Colorado are being closely monitored by policymakers and advocates on both sides of the marijuana legalization divide. Researchers generally agree that marijuana use during adolescence should be strongly discouraged — younger users are more likely to become dependent on the drug, and teens who use marijuana heavily are at higher risk of a number of mental and physical health problems later in life.

Opponents have often claimed that marijuana legalization would lead to more kids smoking pot, with all the negative health consequences that would entail. But the scant data available until now hasn’t borne this out.

National surveys have shown that teen marijuana use rates are falling across the country. But there haven’t been many numbers available specifically for states such as Colorado and Washington where it is legal. Federal data released late last year showed that teen use rates in Colorado and Washington were essentially flat, but they covered only 2014, the first year commercial marijuana was available in those states.

The latest data from Colorado includes 2015, reflecting two full years of the legal marijuana market’s effect. These numbers give the strongest indication yet that fears of skyrocketing adolescent use have not materialized.

“These statistics clearly debunk the theory that making marijuana legal for adults will result in more teen use,” Mason Tvert, director of communications for the Marijuana Policy Project, said in a statement. “Levels of teen use in Colorado have not increased since it ended marijuana prohibition, and they are lower than the national average. Elected officials and voters in states that are considering similar proposals should be wary of claims that it will hurt teens.”

Smart Approaches to Marijuana, a group opposing legalization, has pointed out that the most recent federal surveys show that teen marijuana use rates in Colorado are among the highest in the country. But this latest survey, conducted by the state of Colorado, shows that teen use rates in that state are about average. Why the discrepancy?

There’s a simple reason why legalization may not be having much of an effect on teen marijuana use — adolescents already report that marijuana is widely available. Nationally, roughly 80 percent of 12th-graders say that pot is easy to get. The kids who want to smoke weed are probably already doing so — and legalization would do little to change that.