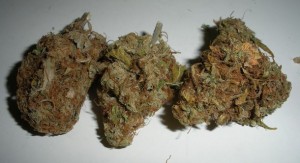 Psychoactive THC impacts several different neurotransmitters in the brain. However, it’s most famous for producing a spike in feel-good chemical dopamine. Dopamine is responsible for focus, attention, pleasure, pain, and reward.

Non-psychoactive Cannabidiol (CBD) works a bit differently. It modulates the release of a variety of different neurotransmitters. When you have a little too much of something, it can calm the brain down. If you’re too low, it can restore balance and lift your mood.

Blood vessels in your eyes have opened up, allowing more blood to flow into the area. This can be highly beneficial for anyone with eye pressure troubles, like glaucoma patients.

3. Sexual under performance in men is possible – In men, marijuana use is associated with delay or trouble with orgasm. This may also be partly caused by the interaction between marijuana compound and male sex hormones like testosterone.

Some animal research has shown that testosterone spikes and dips while you’re high and then returns to normal later on.

Similarly to women, there are many things that can throw male sex hormones out of wack. Maintaining a healthy diet and lifestyle can help ensure that you have the right hormonal balance for you prior to the effects of marijuana.

It’s also important to not that there are a lot of men out there who fully enjoy weed-induced sex. Just make sure not to smoke so much you wind up stuck on the sofa.

4. Marijuana heightens your senses – After consuming a little herb, have you noticed that colors look a little brighter? That the smell of food became a little more irresistible? The same blood pressure effects trigger pupil dilation, which makes colors seem a little more vivid than usual.

Animal studies have also shown that THC stimulates the olfactory bulb. This is the scent sensing area of the brain. In mice, these enhanced smelling powers led them directly to food. So, expect heightened visceral awareness from the psychoactive herb.

5. Marijuana makes you really love eating – Ever wonder where the munchies come from? THC binds to the same location as compounds that control appetite and metabolism. When you take in THC, it kicks your metabolism into overdrive.

It jump starts the production of the hunger hormone ghrelin and another hormone called leptin. Incidentally, leptin is responsible for telling your brain when to stop storing calories as fat.

At the same time, the dopamine spike from marijuana makes eating feel absolutely awesome. Dopamine is already released when we eat, but marijuana enhances the whole experience. This makes food taste awesome and wonderful to eat.

Though the plant has not caused any deaths to date, it is thought that your risk of heart attack increases when you consume marijuana. So, be mindful of heart complications when you toke up.

Marijuana is an amazing herb with ample therapeutic potential. These 6 facts are far from a complete representation of the plant.

Yet, for those who are a little canna-curious or are trying to make sense of your experiences, these are the most basic things you need to know.