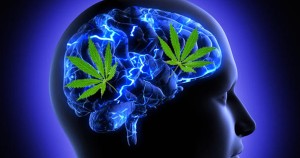 Did you know that marijuana is extremely beneficial for your brain? Here is a list of 5 incredible reasons you should probably consume more marijuana.

1. Brain Cell Growth – One of the few substances on the planet that actually helps your brain grow, cannabis is capable of producing neurogenesis. Several disorders, including depression, anxiety, are caused by a lack of adult stage neurogenesis. This unique ability is also why cannabis helps people who have suffered from strokes, seizures, and brain injuries recover faster.

Why does it work so well? Well CBD, a cannabinoid found in pot, shuts off the ID-1 gene that causes cancer to spread. THC induces cell death in C6 glioma cells, an aggressive form of brain cancer. Other cannabinoids, especially when used together, enhance these effects, not only stopping cancer in its tracks but actually shrinking tumors.

So the next time someone tries to say that cannabis is bad for your brain, tell them that, in fact, the opposite is true. Using the herb is both healing and protecting. Think of it like a form of insurance, and take reassurance that you are doing a good thing.

3. Alzheimer’s Prevention – Over 44 million people around the world suffer from Alzheimer’s. The disease is caused by beta-amyloid plaques building up in the brain. Cannabis treats and even reverses the condition by clearing this plaque away. Dr. Chuanhai Cao, PhD., is a neuroscientist at the Byrd Alzheimer’s Institute, and explains it like this:

Earlier studies, like this one from 2008, concur that THC

“simultaneously treated both the symptoms and progression of Alzheimer’s disease.”

The study’s conclusion was that

“compared to currently approved drugs prescribed for the treatment of Alzheimer’s disease, THC is considerably superior.”

Before cannabis’s effects on Alzheimer’s disease were discovered, it was considered the only top 10 cause of death in the US that could not be prevented, treated, or slowed.

4. Anxiety – One puff of smoke, dose of oil, or bite of an edible and you will start to feel more happy and carefree. That is because cannabinoid receptors are found in centers of the brain that control mood, behavior, and thought. It’s euphoric and relaxing effects on both body and mind help you to shed anxiety like an itchy wool coat.

Cannabis can sometimes increase anxiety, but that can be easily avoided. When a person is matched with a strain that has the right cannabinoid ratio for their needs, the relief is profound. Often, milder strains or lower doses are the perfect key to treating anxiety, rather than causing it.

5. THC Protects Brain From Injury – NFL players know it works, and so does science. Cannabis acts as a protector and preventative in the system. Studies have shown in 2012 and 2013 that it protected the brains of mice from head trauma and carbon monoxide poisoning.

In humans, a 2014 study found those with residual THC in their system were 80% less likely to die from traumatic brain injury, such as the impacts professional athletes and car crash victims often receive.

With the annual death toll from head injuries in America at almost 52,000, even once-a-week cannabis use could save an estimated 41,600 lives!

Do yourself a favor and consume as much marijuana as you can and your brain will thank you later on life.