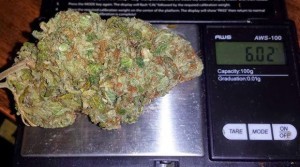 Post-traumatic stress disorder (PTSD) is a psychological condition that occurs in response to severe or protracted stress, such as experiencing warfare or interpersonal violence (which may be physical, emotional or sexual). Numerous PTSD sufferers self-medicate with cannabis, and several studies indicate potential benefit.

PTSD is classified as an anxiety disorder, and is characterized by recurrent symptoms in which the sufferer relives the original traumatic event via nightmares, flashbacks and intrusive thoughts; sufferers go to great lengths to avoid reminders of the traumatic event, and spend significant periods in a state of increased anxiety and emotional arousal.

Not all individuals who experience severe trauma will develop PTSD, but prevalence is high nonetheless. It is estimated that up to two-thirds of the general population will experience trauma at some stage in life; the lifetime prevalence of PTSD varies drastically between populations, with the US averaging around 8%, and Cambodia and Algeria averaging 28% and 37% respectively.

There is abundant evidence of the endocannabinoid system’s fundamental role in the regulation of fear and anxiety–in fact, it is thought that variations in the CNR1 gene that encodes for the expression of the cannabinoids receptors may render individuals more or less susceptible to anxiety disorders such as PTSD.

A 2011 study on mice concluded that overexpression of CB?-receptors reduced anxiolytic behaviours and caused an increase in ?-aminobutyric acid (GABA) in the hippocampus and hypothalamus. A 2013 in vivo study on humans found that individuals with PTSD had elevated levels of CB?-receptors, along with reduced levels of the endogenous agonist anandamide, and reduced levels of cortisol. It was noted that presence of these three factors could be used to correctly classify 85% of PTSD cases.

It appears that cannabinoid signalling has important but differing roles in the fear response according to the area of the brain in question. A 2007 study on mice found that CB?-knockout mice (bred to lack CB?-receptors) exhibited a lack of contextual conditioned fear response; in wild-type mice the CB?-receptor agonist WIN-55,212-2 increased the fear response, while the antagonist AM-251 reduced it.

The researchers noted that the hippocampus is involved in the contextual fear response, while the more primordial cue-induced fear response is associated with the amygdala. Previous studies have found that CB?-receptor agonists are involved in eliminating the cue-induced response associated with the amygdala by extinguishing aversive memories normally stored immediately after experiencing aversive stimuli. A 2014 study on rats provided further evidence of this, by showing that administration of the CB?-receptor agonist WIN-55,212-2 two hours subsequent to aversive stimulus mitigated the startle response when later exposed to situational reminders.

Thus, according to the area of the brain and whether the fear response is contextual or cued, administration of THC and other agonists may have either positive or negative effects. A simple way to describe the difference between cued and contextual fear responses is that the cued response occurs as a result of the original aversive stimulus being repeated, while the contextual response occurs when the subject is placed in the same or similar setting as that in which the aversive stimulus originally occurred.

What this means for human PTSD sufferers is unclear (if these results can even be replicated in humans), but it may mean that different cannabinoids (or different ratios of cannabinoids) will be more useful at different stages or for different aspects of the recovery proces

PTSD has various long-term neurological effects, which underlie the sufferer’s response to stressful situations subsequent to the initial aversive stimulus or stimuli. In the majority of individuals, stressful situations will be processed and remembered via a complex set of neurochemical interactions, in order to minimize the risk of future repetition. If this process is chronically disrupted, normal responses to potentially-stressful situations can become irreparably impaired as abnormal biological mechanisms become entrenched, and PTSD can develop.

It has been repeatedly observed that women are more likely than men to develop anxiety disorders after exposure to trauma, and there is evidence that the neurological effects also differ. This has also been noted in animals: in 2011, a study on rats found that females had higher levels of CB?-receptors in the cerebellum and brain stem in normal conditions, and experienced greater levels of CB?-receptor phosphorylation (inactivation via addition of a phosphate group, through the action of substances known as protein kinase enzymes) and lower overall levels of CB?-receptor activity in response to repeated stress.

This suggests that women may experience greater subjective relief from use of CB?-receptor agonists, which could explain the preference for THC observed in females noted by the authors of the study–and an increased propensity to become dependent on and experience “cravings” for cannabis. Thus, cannabinoid agonists should be investigated further in order to develop female-specific therapies to provide neuroprotection in PTSD cases.

In 2009, a clinical trial investigated the effects of the synthetic agonist nabilone on 47 patients diagnosed with PTSD suffering from treatment-resistant nightmares. 72% of patients receiving nabilone experienced either “cessation of nightmares or a significant reduction in nightmare intensity”.

Some patients also reported subjective improvements in duration and quality of sleep, along with a reduction in night sweats and flashbacks during waking hours. Four patients even stopped their usual medication after several months of receiving nabilone, as their nightmares did not return or remained mild after nabilone withdrawal. Other patients found that their nightmares returned rapidly after ceasing nabilone; 28% of the original sample discontinued the program after experiencing “mild-to-moderate” side-effects.