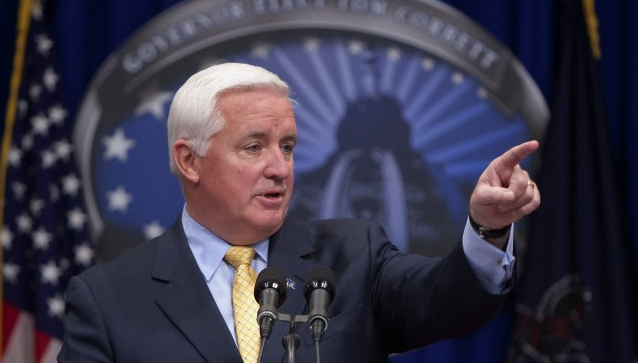 HARRISBURG, Pa. (AP) — Gov. Tom Corbett has changed his position on medical marijuana policy and now supports the legalization of a marijuana extract to treat severe seizures in children, his office said Thursday.

Corbett’s office confirmed to The Associated Press that the Republican governor was meeting with several parents to tell them in person about his decision. The governor remains opposed to other forms of medical marijuana, however, a spokesman said.

Corbett had been under pressure on the issue from two state senators and parents who believe the oil extract, called cannabidiol, can save the lives of their seizure-wracked children. All four Democrats running to challenge Corbett in the fall support the legalization of medical marijuana, and some parents were preparing a sit-in at Corbett’s offices if he did not agree to meet with them.

A spokesman for Corbett, Jay Pagni, said a plan developed by the governor in an effort to try to ease the suffering of the children, but strictly control access, will need approval from the Legislature.

Under that plan, cannabidiol, or CBD, would be dispensed at research-based hospitals by medical professionals with experience treating children who have severe seizure disorders or Dravet syndrome, a form of epilepsy.

“The governor is providing an option for families seeking the use of cannabidiol, with strict controls and under careful oversight of doctors and hospitals,” Pagni said.

Pagni said Corbett and his staff have been quietly researching the issue and meeting with parents and medical professionals since last fall.

Twenty-one states and the District of Columbia now have broader laws on medical marijuana, according to the National Conference of State Legislatures. Numerous other states are considering it and Florida’s Supreme Court has approved placing a proposed constitutional amendment on the November ballot to make it the first state in the South to legalize the medical use of marijuana.

Separately, Alabama’s governor signed a law in March that is close to the concept that Corbett is now backing, and Florida’s Senate overwhelmingly passed a similar bill on Monday.

The extract comes from a strain of marijuana called Charlotte’s Web, named after the first child treated with it. The plant is low in THC, the hallucinogenic chemical in marijuana, and high in CBD, a chemical that may fight seizures. It can be delivered by dropper or pill form.

Parents of children who suffer seizures have traveled to the state Capitol several times in recent months to make their case and in January testified before a Senate committee.

They say their children suffer hundreds of seizures a week and have lost their ability to function intellectually at their age level. They fear that a seizure will kill their child and say they have found no relief from numerous federally approved medications that carry debilitating side effects.