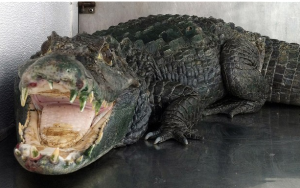 When Alameda County Sheriff’s deputies entered the Castro Valley home on Tuesday, they not only found 34 pounds of marijuana valued at an estimated $100,000 (£61,000), but also the 5-foot-long caiman inside a Plexiglas tank guarding it in a bedroom.

Caimans are usually found in the wetland regions of Central and South America. They are considered close relatives of alligators.

“We get guard dogs all the time when we search for grow houses and people stashing away all types of dope. But alligators? You just don’t see that every day,” Sgt. J.D. Nelson said.

The reptile’s owner, Assif Mayar, was arrested on Tuesday and later charged with one count of possessing marijuana for sale. Mayar, 32, did not enter a plea during his arraignment in Alameda County Superior Court. He is being held in jail on $20,000 bail and is due back in court on Jan. 15.

He could also face citations from the California Fish and Game Commission, including possession of an exotic animal without a permit.