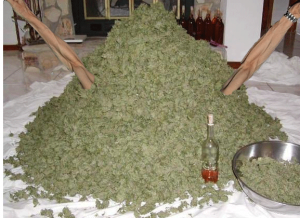 The pot market is crashing in California’s legendary Emerald Triangle.

The closure of hundreds of marijuana dispensaries across California and a federal crackdown on licensing programs for medical pot cultivation are leaving growers in the North Coast redwoods with harvested stashes many can’t sell.

Purportedly legal medical cultivators are fleeing to the black market. So much cheap weed is getting dumped in the college town of Arcata, some local dispensaries say business is down 75 percent.

Even the region’s itinerant and colorful bud trimmers are going broke.

By the scores, people have long trekked into the marijuana fields and indoor greenhouses of Humboldt, Mendocino and Trinity counties. Workers used to earn as much as $200 a pound meticulously cutting leaves from marijuana buds, prepping them for display at dispensaries or for sale in a purely illicit market.

These days, a 47-year-old man called Mover, a dreadlocked migrant from Ohio who is a fixture in downtown Arcata, says the tedious work isn’t worth his trouble as the per-pound pay rate has dropped to $100 or often just a few nuggets of pot.

“I got paid in weed,” Mover, who refused to give his real name, said of his last trimming job. “It’s worthless here. You can’t give it away. And I’m not going to transport anything. I’m too old, and I don’t want to go to jail.”

The region’s pot pilgrimage had accelerated in recent years as people were drawn by local cannabis traditions and dreams of cashing in on the medical marijuana market. They planted marijuana in the backwoods and in rewired houses with high-intensity grow lights.

But the saturation of pot growers set off a price tumble by 2010, as a pound of prime Emerald weed slipped from $5,000 to the $3,000 range for marijuana grown indoors to the $2,000 range for product grown outdoors. Lately, prices are in free fall.

“Last I heard, a pound of marijuana is $800 for outdoor grown,” said Mendocino County Sheriff Tom Allman in Ukiah. “That’s plummeting. You might do better with tomatoes.”

The marijuana meltdown could have major regional effects. In Humboldt County, a recent study by a local banker estimated marijuana accounts for more than one-fourth of the county’s $1.6 billion economy.

In recent years, many locals already thought the influx of pot growers exceeded demand in the state’s sanctioned medical pot market. When U.S. authorities in October announced a crackdown on medical marijuana businesses they contended were profiteering in violation of federal and state laws, it darkened their fears.

Lelehnia Du Bois, 41, was one who thought she had found a safe niche. A former fashion model in Southern California, Du Bois started growing marijuana indoors in Eureka after rupturing her spinal cord. She supplied her unused home-grown “Sweet God” to a Eureka dispensary, earning $5,000 a year on top of her disability income, she said.

Du Bois had spent her childhood in Trinity County and remembers growers having “a big pot-luck” meal after the outdoor marijuana harvest. She said the weed culture changed markedly as indoor growers in Arcata and Eureka competed for access to the medical market – and many went into illegal trafficking.

As indoor pot prices dropped as low as $1,800 a pound, “People started taking risks. All of a sudden, people were not farmers. They were drug dealers,” Du Bois said.

Last year, months before federal prosecutors began targeting California dispensaries for closure, Du Bois got out of the pot business and moved out of Humboldt County. She now lives in Utah.

“Many people distributing in the medical marijuana market didn’t get into it for the risk situation,” he said. “The people who were formerly in the black market were able to stay functioning. People who were not criminals can’t move their product.”

Pressures on growers intensified after Drug Enforcement Administration agents raided a marijuana farm that had been licensed by Mendocino County and was considered a model for establishing local compliance rules for medical cultivation.

The raid prompted Mendocino County supervisors in January to rescind a program that allowed the sheriff to enforce a 99-plant limit on pot farms by attaching $50 zip ties to each plant and inspecting the gardens of nearly 100 growers who provided documentation to show they were serving medical pot users.

The program, which also offered cheaper tags for smaller quantity growers, brought in $630,000 in county fees in two years.

Sheriff Allman said it allowed his department – which spends 30 percent of its $23 million budget on pot enforcement – to target major cultivators he says are illegally growing thousands of plants, diverting water and fouling the environment.

Humboldt County had sought to put a similar program in place last summer as District Attorney Paul Gallegos called for licensing to ensure “sustainable and responsible cultivation.” After the federal government launched its crackdown, supervisors tabled work on the plan, and Eureka and Arcata placed moratoriums on new dispensaries.

Among the most worried cultivators are the outdoor growers who increasingly struggle to compete with the exotic strains produced in climate-controlled indoor grow rooms.

Alison Sterling Nichols, executive director of the Emerald Growers Association, which seeks to protect the Emerald Triangle’s sun-grown pot traditions, said outdoor growers were most directly affected by the collapse of local licensing programs. The group backs legislation to regulate medical marijuana statewide as long as it would preserve growers’ ability to supply dispensaries.

“People shouldn’t have to sleep with one eye open,” Sterling Nichols said. “People should be able to move from the black market into the light. We haven’t been able to bridge that gap. We have hills of healthy outdoor product we can’t take to the market.”

Meanwhile, many worry the Emerald Triangle will go back to being the hub of California’s illegal marijuana trade.

Last month, authorities in Pennsylvania arrested the former operator of a Humboldt dispensary for allegedly shipping more than 25 pounds of pot in heat-sealed packets to a home he was visiting. State officers in Nebraska also stopped a Mendocino County man and a companion with 62 pounds of weed stuffed in duffle bags.

In Mendocino, Allman said his officers last year eradicated 642,000 plants, some loosely tied to Mexican trafficking networks but most involving Californians or residents from other states who secretly grew on public lands and private property.

With a federal crackdown and a shrinking market, Allman said, many out-of-towners may leave and “everything is going to go underground.”