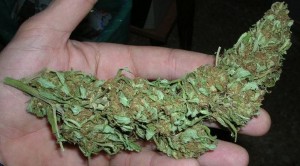 A bipartisan group of lawmakers has come together to back a bill that would prevent the federal government from prosecuting individuals and businesses for drug crimes when they are in compliance with their states’ marijuana laws.

On Wednesday, Rep. Dana Rohrabacher (R-Calif.) introduced the Respect State Marijuana Laws Act of 2015 (H.R. 1940), a measure that would require the federal government to respect states that have ended prohibitions on the plant. Rohrabacher, who introduced the same bill in 2013, was joined by five members of his own party and six Democrats.

“The American people, through the 35 states that have liberalized laws banning either medical marijuana, marijuana in general, or cannabinoid oils, have made it clear that federal enforcers should stay out of their personal lives,” Rohrabacher said in a statement Wednesday. “It’s time for restraint of the federal government’s over-aggressive weed warriors.”

Twenty-three states, along with the District of Columbia, have legalized medical marijuana, while 13 others have legalized limited cannabis extracts for specific therapeutic use. Four states and D.C. have legalized recreational marijuana. However, the federal government continues to ban marijuana in all forms, classifying it as one of the “most dangerous” drugs alongside heroin and LSD.

And while a federal spending bill signed by President Barack Obama in December prohibits the Department of Justice from using funds to interfere in state-legal medical marijuana programs, the DOJ has said that it doesn’t believe the congressional measure prohibits them from prosecuting individuals or businesses in violation of federal law.

The House bill introduced by Rohrabacher would go further than those previous measures by amending the Controlled Substances Act so it would make an exception to federal law for states that have developed their own marijuana policies.

The federal government has ignored the congressional action, also introduced by Rohrabacher, in ongoing federal asset forfeiture actions against multiple dispensaries in the San Francisco Bay Area. The congressman sent a letter to Holder slamming the DOJ’s interpretation of his amendment, calling the department’s interpretation “emphatically wrong.”

The report also found that most Americans would support a new federal law that would make those marijuana-legal states a “safe haven” from federal laws against cannabis, allowing them to act outside of federal policies on the substance.