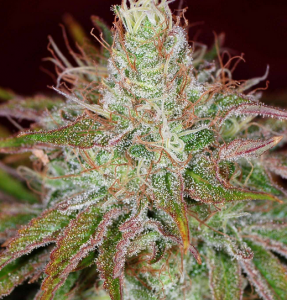 In Greek, “Euphoria” means “having health”, as in physical health or an intense feeling of well-being. Fittingly, Dutch Passion’s Euforia is a very healthy, disease resistant plant. She grows strong with minimal tending indoors or out, and flourishes in Southern Europe and similar climates. She also of course provides the euphoric bliss that smokers want from primo cannabis.

Indoors, Euphoria Marijuana is a performer that delivers on any stage, whether grown in soil, coco, or hydro, as a multi-branch or in a sea of green. She is a “half open” plant with widely spaced foliage, not bushy, and usually does not need branch supports even though her buds can get quite hefty. Because her branching and foliage is minimal, Euphoria Marijuana requires only the lightest of pruning for maximizing light and harvest. Careful growers start removing fan leaves slowly in week eight of flowering. She will stay strictly green unless she is grown outside, in which case her medium-thick leaves may range into purple tones.

Indoors, this variety reaches 80-100 cm (32-40 inches) in 30 days on average, and can be harvested after 9 weeks, the end of her second flowering wave. Some people like to wait for a bumper harvest that will come about a month after initial harvest; in other words, Euphoria Marijuana flowers three times and yields twice over 13-14 weeks in total.

This sweet, blossom-scented variety delivers a very pleasing and up high. It is an active pot, which can be useful medicinally when marijuana’s soothing properties need to be balanced with lucidity and energy. Euphoria Marijuana also adds a smile to the recreational smoker’s day without hampering other activities if used in moderation. However, it is less desirable as a before bed toke, and may even keep smokers awake. Euphoria Marijuana has won awards at the High Times Cannabis Cup and the High Life Cup.

Ever smoke or grow Euphoria Marijuana? Tell us about it in a comment below!