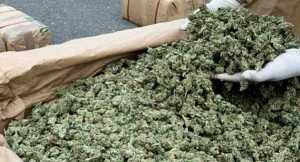 It’s safe to say marijuana is one of the things you can’t order on Amazon.

Tell that to the Orlando couple who received 65 pounds of weed in a recent shipment, reports local ABC affiliate WFTV.

The couple, who WFTV said did not want to be identified for safety reasons, said they ordered plastic storage bins. They received the bins, but with the added bonus of 65 pounds of marijuana stuffed inside.

“They were extremely heavy, heavier than you would think from ordering four empty bins,” said one of the customers.

Once they learned what was inside the bins, they contacted police. “When the first officer got here, she was in disbelief,” the customer told WFTV.

Sgt. Eduardo Bernal, public information officer with the Orlando Police Department, said they are cooperating with authorities in the state where the package shipped. WFTV reports the package was shipped from a facility in Massachusetts.

Amazon said it will also work with police on the case. “Our customer service team worked directly with the customer to address concerns and will work with law enforcement to investigate the case, as needed,” Amazon said in a statement.