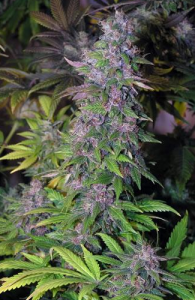 These days, everyone has their BlackBerry to stay connected and functional in the moderm world. Nirvana believes that their version of Black Berry may help you deal with the pace of the modern world in a different sense. The Black Berry variety actually gets its name from a combination of its parents’ names; it is a Black Domino / Raspberry Cough hybrid. The Black Domino mother is an indica-dominant hybrid that originated in the Seattle area, then traveled to Amsterdam in clone form. In this cross, she is combined with Raspberry Cough (also in this book), an indica-sativa hybrid of Nirvana’s ICE strain, and a landrace strain from Cambodia.

Black Berry likes a steady, stable home that is kept within ideal parameters. Because this plant is exacting, results will be largely based on the gardener’s ability to maintain conditions, making it more suitable to an experienced hand and an established gardening setup. Black Berry is best as an indoor plant due to its sensitivity to weather variation and its flowering time, which ranges from 9 to 11 weeks depending on the phenotype. Indoor environments are the only suitable places for this plant outside the equatorial region, but inside that geographic area, it can thrive outdoors and will finish by the middle or end of October.

Black Berry retains her Black Domino mother’s figure, forming a tight, almost prim narrow plant structure that is branchier for some phenotypes. Growth is uniform and compact, and turns dark velvety green. This strain performs best in soil, but flourishes in many setups, including sea of green arrangements or as multi-branch plants. The Black Berry bud development is also tight, forming long, pointy, or in some cases, bulb-shaped colas with minimal hairs. Despite the density of the buds, Black Berry is resistant to molds. It is also a very stinky grower. Using organics help to bring out the best flavor and aroma. By finish, Black Berry roughly doubles in size and averages for yields of 400-500 grams per square meter in a sea of green with 600-watt lights.

The Black Berry high is upbeat and clear, with a quick onset and a nice tapering endurance. It is a functional smoke well suited to daytime activities and can create a more casual unhurried sense of weel-being without impairing one beyond comfort in most social situations. The flavor is heavy and fuel-like and forms thick smoke. The finish leaves hints of spicy South Asian flavor on the tongue. Black Berry was released in 2009, and has gained fast popularity among patients in Canada.

Ever smoke or grow Black Berry weed? Tell us about it in a comment below!