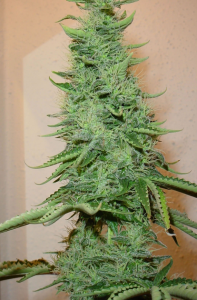 Big Bud is a classic favorite, and with good reason. This plant has traits that so many marijuana growers and enthusiasts are after: prodigious growth and a desirable high. Already a part of the Seed Bank breeding program in the 1980s, Big Bud was first sold as a hybrid with Skunk #1 from the Sacred Seed Company. This is the version that claimed 1989 win in the mostly indica category at the Cannabis Cup. In the 1990s, Sensi Seeds and Seed Bank merged and new attention was given to this hybrid. Another sweet, high-yielding, heavy indica line was crossed into the original hybrid, making this pant-type sweeter and more delicious to connoisseurs. With the new burst of flavor, the strain became interesting for more than just its heavy yields, which resulted in a fully unexpected prize for Big Bud in the 1996 Cannabis Club.

As the name suggests, this variety is a producer: it is a good idea to tie up bottom branches because they make break because of the weight. A large internode ratio means that this variety requires minimal pruning to get maximum light to the flowers and makes an easy job of manicuring at harvest. Big Bud is fairly short with a traditional indica leaf structure, but unlike the stereotypical indica, can become tall and lanky if not properly tended. As with a typical indica/sativa hybrid, Big Bud may triple in size from the time the light cycle is changed. Big Bud also finishes in as few as 50 days with an impressive yield. The high is mellow with a sweet and spicy flavor, a long duration and a more indica body stone.

This variety is suitable for a sea of green method or for a garden of bigger plants. While relatively flexible, Big Bud has shown some sensitivity to the typical marijuana insects and pests. Best results occur in the indoor environment, where variables re more easily controlled. Hydro gives the best yields, but Big Bud can also thrive in soil, especially in the right outdoor conditions (not the case with the Netherlands weather). She can be expected to give the grower some beautiful flowers as long as they keep a tidy garden.

Ever smoke or grow big bud? Tell us about it in a comment below!