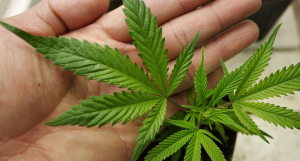 Whoopi Goldberg announced that she only smokes marijuana these days for medical purposes, and she said that children should be able to use the drug for the same reason.

The View host has a history of proclaiming her love of cannabis and has now claimed it helps treat her glaucoma symptoms.

‘I had just been smoking a long time before the glaucoma, and for the fun of it,’ she told High Times magazine.

‘What I did notice is that there were fewer headaches. Didn’t take me long to see there might be a correlation,’ she said.

She added that almost all of her ‘use nowadays is medical’, according to the New York Post.

And while she uses it to treat her glaucoma, she told the magazine that she is also an advocate for pediatric medical marijuana for sick children.

People use medical marijuana to relieve symptoms and side effects of a number of illnesses, including epilepsy and cancer.

She went on to say that families who have tried giving their children cannabis are ‘being treated like criminals’.

She added: ‘Because, as a last resort and after much research, they’ve decided that cannabis may help their kid.

‘They know they may face jail time, but these are their kids and they will do everything they can to bring peace to the convulsions or calm after the chemotherapy.’