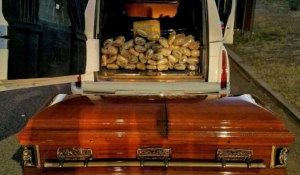 US authorities also said the coffin was packed with manure, likely meant to mask the smell. The drugs were valued at more than $33,000, and the driver, a 28-year-old male, was arrested.

The legalization and decriminalization of marijuana for medicinal and recreational purposes in the US is believed to have cut into the profits of the traffickers who have long smuggled the drug into the US from Mexico. (The cultivation of high-quality marijuana in the US has also led to smuggling of US weed into Mexico.)

But smugglers are still bringing the drug into the US — often in creative ways.

In the last year, US agents have found marijuana disguised as limes, packaged to look like carrots, concealed in bundles meant to look like watermelons, and hidden in a shipment of cucumbers. Smugglers have relied on catapults to hurl marijuana over the border — sometimes being so bold as to strap the catapult to the border fence meant to stop them.

The southwest border isn’t the only transit area for marijuana, however. In late summer 2016, the US Coast Guard recovered almost 400 pounds of the drug floating in the waters around eastern Florida and the Keys.