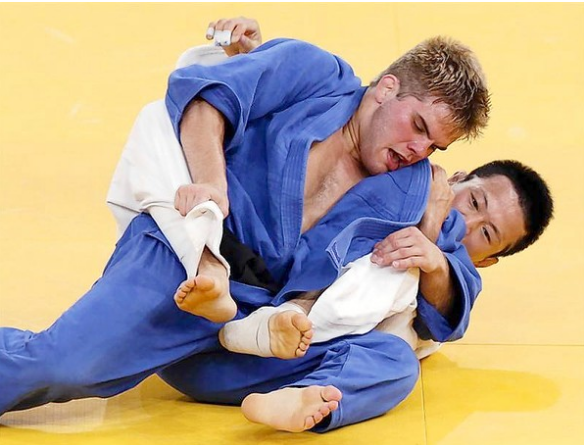 U.S. judo competitor Nick Delpopolo was expelled from the London Olympic Games on Monday after testing positive for marijuana and apologized to organizers, fans and fellow athletes for unwittingly eating a brownie that had been baked with the drug.

Delpopolo, 23, who finished seventh in the 73kg event, accepted his expulsion.

“My positive test was caused by my inadvertent consumption of food that I did not realize had been baked with marijuana, before I left for the Olympic Games,” said Delpopolo, who trains in New York.

“I apologize to the U.S. Olympic Committee, to my teammates, and to my fans, and I am embarrassed by this mistake. I look forward to representing my country in the future, and will re-dedicate myself to being the best judo athlete that I can be,” he said in a statement.

The athlete waived the right for his case to be heard before the Disciplinary Commission, and the USOC said it fully supported the expulsion.

“The USOC is absolutely committed to clean competition and stringent anti-doping penalties. Any positive test, for any banned substance, comes with the appropriate consequences and we absolutely support the disqualification. We look forward to witnessing the continued success of our athletes and commend their dedication to clean sport.”

President John Fahey indicated earlier this year that WADA may look at changing the criteria for cannabis as a banned substance for athletes, but no decision is expected this year.

At the moment, a substance appears on the banned list if it meets the following criteria: it is proven to be performance enhancing, it goes against the spirit of sport, or it is dangerous to the health of athletes.

Marijuana, or cannabis, qualifies as a forbidden drug under the current rules, with athletes facing a two-year ban if it is found in their system.

While it is generally accepted that cannabis is unlikely to give athletes a performance advantage in fast-paced sports, some experts say it could prove helpful in sports like shooting or golf where a steady hand is needed.

Delpopolo brings the number of athletes suspended by the IOC to five since the start of the Olympic period on July 16.

Belarussian hammer thrower Ivan Tsikhan and Moroccan runner Amine Laalou were also ruled out with the International Association of Athletics Federations (IAAF) saying they had been charged with anti-doping rule violations.

Several other athletes, including Brazilian rower Kissya Cataldo da Costa who was expelled for failing a dope test for the blood-boosting EPO, have been sent home by their own federations.

Delpopolo is set to leave London for the United States on Tuesday where he will attempt to piece his career back together.

The stockily built blond-haired judoka, who only narrowly missed out on a place in the semi-finals of the 73kg category, told Reuters last week how he was aiming for the 2016 Games in Rio, and cheerfully looked to the future when talking about prospects for U.S. judo.

“It’s not an old team but it’s not exactly a young team either, so I think it depends on what we’re all going to do. If we all stay, look out,” he said.