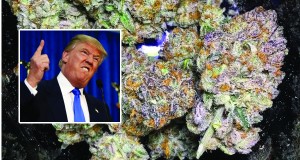 The White House on Thursday put states that have legalized recreational-use marijuana on notice that federal law enforcement agents could be targeting them soon.

It was the clearest warning yet that the Trump administration may move to disrupt the marijuana trade in the eight states, including California, that have legalized the recreational use of pot.

White House Press Secretary Sean Spicer told reporters that the administration had no plans to continue the permissive approach of the Obama administration and that it viewed recreational marijuana use as a flagrant violation of federal law.

Spicer said recreational marijuana was a scourge, likening its widespread use to the opioid addiction epidemic — an incendiary charge that many medical experts would dispute. But the comments intensified concerns that the robust recreational marijuana trade that has been brought out into the open in recent years — generating hundreds of millions of dollars of tax revenue — could soon be disrupted by federal agents.

“When you see something like the opioid addiction crisis blossoming around so many states … the last thing we should be doing is encouraging people,” Spicer told reporters. “There is still a federal law we need to abide by in terms of when it comes to recreational marijuana and other drugs of that nature.”

Asked whether states that have legalized recreational use could be targeted by federal actions, Spicer said, “I do believe that you’ll see greater enforcement.” He said that while federal law prohibits raids of medical marijuana operations, “that’s very different than the recreational use, which is something the Department of Justice, I think, will be further looking into.”

It has been years since the Drug Enforcement Administration sent agents on busts of pot businesses operating legally under state laws. The Obama administration issued an administrative policy putting a stop to such federal raids, even as it continued to classify the drug as more dangerous than cocaine. Congress further reassured marijuana users in 2014 by banning the DEA from using federal funds to go after medical marijuana operations operating legally under state laws.

To many, the legal recreational pot trade in America has grown so large, routine and socially acceptable that it has become too big to jail.

But the marijuana industry has been on edge since Trump’s election. While the president’s position on the drug has been murky, his appointment of former Sen. Jeff Sessions as U.S. attorney general rattled dispensary owners and growers. Sessions is a longtime crusader in the war on drugs, as is Vice President Mike Pence.

“It looks like the first shoe is dropping as expected,” said Ethan Nadelmann, executive director of the Drug Policy Alliance. “Trump was never all that reassuring on the issue of marijuana legalization.”

How far the administration would go in provoking states that have legalized pot is unclear. The options range from largely symbolic gestures such as cracking down on the illegal transportation of marijuana between states or initiating a few seizures from dispensaries, to filing injunctions seeking to nullify state legalization laws.

Any such enforcement brings political risk, and could undermine Trump’s positioning as a champion of states’ rights. Spicer’s announcement comes only days after the formation in the House of the first Cannabis Caucus. The founding members are two Democrats and two Republicans, a reminder of the bipartisan appeal of the issue.

“The federal government should stay out of this. Period,” Rep. Don Young (R-Alaska), one of the caucus founders, said as it was launched last week. “I am happy to say that we will butt heads with the attorney general when we have to. We will do our job.” Alaska, a deeply Republican state, is among those that have recently legalized recreational use.

The Trump administration positioned itself to go after recreational pot on the same day a new Quinnipiac poll showed 71% of Americans surveyed are opposed to the kind of enforcement action Spicer suggested is coming. The same poll found 59% of Americans support full legalization of marijuana.

“We have hoped and still hope that the federal government will respect states’ rights in the same manner they have on several other issues,” said Derek Peterson, chief executive of the Irvine-based marijuana firm Terra Tech. “The economic impact, job creation and tax collection associated with both medical and recreational legalization have been tremendous throughout the country.”

But he said states should start preparing to fight the administration in court.

“We hope that the states make a point of defending their independence in regards to this and protect their constituents,” he said.

“I took an oath to enforce the laws that California has passed,” California Atty. Gen. Xavier Becerra said in a statement Thursday. “If there is action from the federal government on this subject, I will respond in an appropriate way to protect the interests of California.”

Some, however, take a different view.

“The current situation is unsustainable,” said Kevin Sabet, the president of Smart Approaches to Marijuana, a group opposed to legalization. “This isn’t an issue about states’ rights. It’s an issue of public health and safety for communities.”