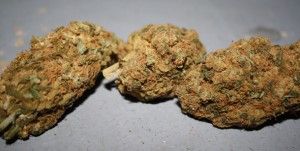 Gorilla Glue #4 has been turning heads for several years and has finally earned her rightful place on our illustrious list. Bred by Josey Wales, Gorilla Glue (or GG for short) is an accidental cross between Sour Dubb, Chem Sister and Chocolate Diesel. Earthy and piney, the strain is very pungent and hard-hitting as well as super-sticky. Patients report that this variety “glues them to the couch,” making her perfect for light sleepers and insomniacs. Growers appreciate the above-average yields, and extract artists rave about the quality and flavor of the oil they produce from Gorilla Glue #4.

The Goji OG isn’t like most of the OGs currently on the market. She has a distinct taste and scent reminiscent of white wine or white grapes, with hints of tart berries and earthy spice, in the Snow Lotus–dominant phenos (Afgoo x Blockhead), and some big, chunky, OG-esque tastes and scents in the Nepali OG–dominant phenos. Expect a decent (medium-size) yield but superior, connoisseur-grade aroma and flavor. If you’re looking for the clone-only versions, keep your eyes out for the Pinesol or Purple Goji phenotypes.

Perhaps the most popular, best-selling marijuana strain right now is Blue Dream. There are a lot of reasons why this strain is topping dispensary lists.

A sativa-dominant hybrid with a distinct flavor profile, Blue Dream is widely known for its relaxing and mellow high. While not as strong or hard-hitting as others, this strain makes a great choice for novices and seasoned smokers alike.

Surprisingly, Blue Dream also gives somewhat of an active buzz, so it’s good for both daytime and evening activities. The fact that it isn’t super-strong makes it more accessible as well. In other words, pretty much anyone can enjoy this strain.

Coming in at number 6 on this list is another legendary bud. Durban Poison is a classic sativa strain originating from the South African city that gave it its name.

Durban Poison’s sweet taste and energizing effects make it the perfect daytime smoke. Many find the high from this strain to be productive and clear-headed — a true characteristic of purebred sativas.

Sour Diesel is famous worldwide — and for good reason. It’s a powerful strain with loads of flavor, and its long orange hairs and frosty trichomes make it very pleasing to look at.

Sour Diesel has a piney smell, but once it’s smoked the fruity and lemony tones start to come out. With a very soothing and relaxing high, this is one strain that is sure to give you your money’s worth.

Green Crack was named by none other than Snoop Dogg because he noticed that anyone who tried it kept coming back for more. Sativa and indica-dominant hybrids are available, and the strain is said to give a very uplifting and relaxed high, much unlike what its name would have you think.

Green Crack isn’t well known for its great smell or flavor, but its pleasant effects and daytime usability are what earn it a spot on this list.

Girl Scout Cookies has been a popular pick for a long time. By now it’s been crossed with a lot of other strains too, so you can find many different variations such as Chem Scout, Animal Cookies, and Blue Sugar Cookies. The original, however, comes from California and is a cross between OG Kush and Durban Poison.

Girl Scout Cookies is a heavy hitter that has won multiple Cannabis Cups and continues to be a solid choice for anyone looking for quick relief of nausea, pain, and low appetite.

While the name gives you an impression that this strain is intense and will envelope you with a high, that’s not the case. The strain will help you feel completely relaxed, happy, uplifted, and euphoric. You’ll be buzzed and still alert and social enough to interact with others.

The strain combines the best qualities of Colombian, Thai, Mexican, and Afghani Sativa and Indica varieties. The flavor is quite complex and can be earthy and sour with a mildly sweet aftertaste. Mind you, some people react differently to AK-47 and are hit with a serious high that would render them relaxed and dazed for quite some time.

The strain was originally produced in 1990’s and has been consistently popular ever since. It’s quite potent and can lay you flat for a few hours if you don’t mind the usage. At first, you’re hit with a surge of energy, happiness, and euphoria.

After the high trickles down, you’ll feel incredibly relaxed and sleepy. Because of this, White Widow is great against stress, depression, pain, and lack of appetite. It has earthy, woody, and pungent aromas, and provides a flavorful experience overall.

10. Northern Lights
Northern Lights stands among the most famous strains of all time, a pure indica cherished for its resinous buds, fast flowering, and resilience during growth. Itself a descendant of indigenous Afghani and Thai landrace strains, Northern Lights has given rise to famous hybrids like Shiva Skunk and Super Silver Haze. Rumor has it that Northern Lights first sprouted near Seattle, Washington, but was propagated out of Holland after 1985 at what is now Sensi Seeds.

Pungently sweet, spicy aromas radiate from the crystal-coated buds, which sometimes reveal themselves in hues of purple. Northern Lights’ psychoactive effects settle in firmly throughout the body, relaxing muscles and pacifying the mind in dreamy euphoria. Comfortable laziness allows patients to relieve pain and sleeplessness, while its mellow contentment roots out depression and stress. Several different Northern Lights phenotypes circulate the market, but Sensi Seeds recommends a general indoor flowering time of 45 to 50 days.