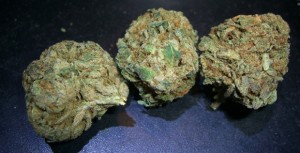 1. Vermont – According to a Rand research study on marijuana legalization, Vermonters consumed between 15 to 25 metric tons of marijuana, worth between $125 million and $225 million, in 2014. More than 19% of state residents 12 years and over reported using marijuana in the past year, the third highest share nationwide. Also, according to the Vermont Department of Health, marijuana consumption is more common among 12- to 17-year-olds in Vermont than in any other state in the nation.

2. Nevada – According to the Marijuana Policy Project, Nevada is one of 20 states to decriminalize possession of small amounts of marijuana. Though no one found in possession of under an ounce of the drug can face incarceration or felony charges, Nevada’s penalties for possession are among the harshest of all the states that have decriminalized. Unlike some states that have decriminalized the small amounts of the drug, like Massachusetts and California, first time offenders in Nevada can still be charged with a misdemeanor and be compelled to undergo mandatory drug treatment.

Despite the harsher penalties, next year Nevada could become the fifth state to legalize recreational use of drug. Voters will have a chance to pass the Initiative to Tax and Regulate Marijuana in November 2016. If passed, legalization will have a dramatic effect on arrest rates and police resources. As of 2012, there were about 8,500 marijuana-related arrests in Nevada, the 14th highest arrest rate in the country.

3.  California – California was in the vanguard of state marijuana reforms in the 1970s and an early adopter of decriminalization. In 1996, the state passed the Compassionate Use Act, which permitted physician-recommended marijuana use for medical treatment. In 2010, Governor Arnold Schwarzenegger signed legislation that reclassified the crime of marijuana possession from a misdemeanor to an infraction. Despite the state’s historically progressive stance, marijuana has yet to be legalized. In 2010, a motion to legalize failed by a slim margin.

Two bills proposing marijuana regulation are now on the table, although the success of each remains to be seen. A great deal may be at stake in the success or failure of marijuana law reform in California. According to St. Pierre, because of the state’s sheer size and influence, the viability of federal legislation largely relies on the precedent California might set.

4. New York – New York was one of the first states to decriminalize marijuana, passing a bill in 1977. However, according to the Marijuana Policy Project, law enforcement agencies have been abusing the “public view” loophole, which differentiates between where offenders are caught — possessing a small amount of the drug in the privacy of one’s home results in a fine, while possession in a public place can result in a misdemeanor. Supporting this claim is New York’s extremely high marijuana-related arrest rate, which was the highest in the country in 2013 at 577.24 per 100,000 people — more than double the national rate. However, New York City Mayor Bill de Blasio announced in 2014 that the city would no longer be enforcing the loophole.

In early July, 2014, Governor Andrew Cuomo signed a medical marijuana bill into law. There are currently two bills to legalize and tax marijuana in the legislature, which is currently on break.

5. Massachusetts – Under Massachusetts’ state law, an individual can only be fined a maximum of $100 for possession an ounce or less of marijuana — the result of a 2008 ballot to decriminalize possession of small amounts of the drug. The impact of decriminalization has been dramatic. While there were more than 10,000 marijuana-related arrests in 2008, there was just about a third as many such arrests in 2009, the first year the law took effect.

Though the state’s marijuana policy is relatively progressive, it appears that decriminalization has not gone far enough for the majority of voters. In a poll released last year by the Boston Herald, 53% of state residents were in favor of legalizing marijuana, while only 37% were against. Proponents of legalization may have a chance to change the state law again in November 2016. Democratic State Representative Dave Rogers and Democratic State Senator Patricia Jehlen introduced a bill to to legalize recreational marijuana use for adults.

6. Minnesota – The first medical marijuana dispensary in Minnesota opened on July 1, 2015. For those who do not qualify for medicinal use of the drug, possession of 42.5 grams, roughly 1.5 ounces, or less can be classified as a misdemeanor and is punishable by a fine of up to $200.

According to a study conducted by SAMHSA, from 2010 through 2013, Minnesota teenagers’ attitudes toward occasional marijuana use have relaxed. In 2010, 70.9% of 12-17-year old state residents did not consider smoking pot once a month to be risky behavior. By 2013, 75.4% of teenagers held the same perception.

7. Connecticut – In a March 2015 Quinnipiac University poll, 63% of Connecticut residents surveyed said they would be in favor of legalizing the possession of small amounts of marijuana for adults. The state decriminalized marijuana use in 2011, decreeing that any possession of the substance up to a half of an ounce would have a maximum penalty of a $150 fine and could not be punishable by jail time. Before the law passed, the state’s marijuana arrest rate in 2010 was 259 per 100,000 people. By 2012 the rate had dropped to just 104 such arrests per 100,000, the sixth lowest rate in the country.

Currently, the state also has several bills in the legislature that would legalize marijuana use for adult residents and regulate the industry.

8. Maryland – The recently adopted Maryland Medical Marijuana State Program permits certified physicians to prescribe marijuana to patients diagnosed with certain conditions. As a result, the state’s first marijuana dispensary, Greenway Consultations, opened this past June. Still, the possession of more than 10 grams of pot is a misdemeanor in Maryland, and possession of less than 50 pounds with the intent to distribute carries a penalty of up to five years incarceration and fines up to $15,000.

Even so, there is a good chance Maryland is on track to legalize the substance. Governor Larry Hogan signed a bill supported by marijuana legalization advocates during the current legislative session. The Second Chance Act, under certain circumstances, permits individuals convicted of possessing marijuana, to have their arrest shielded from some records requests. As in most states on this list, a majority of Maryland residents support the legalization of marijuana.

9. Rhode Island – Marijuana use in the small New England state is pervasive. An estimated 20% of Rhode Islanders aged 12 and up used the drug at least once in 2012. No other state in the country had wider use.

Of the states that have not legalized recreational marijuana use, Rhode Island’s laws are among the most lenient. Possession of up to an ounce is a civil violation punishable by a maximum fine of $150. First time offenders do not face jail time or risk a criminal record. However, possession of amounts in excess of an ounce carry criminal penalties and potential jail time.

There is currently a bill awaiting review in the state legislature that would effectively legalize and regulate recreational use of marijuana. Though the Rhode Island legislature went on summer recess before the Marijuana Regulation, Control, and Taxation Act received final approval, lawmakers may have a chance to review the bill again before year’s end. According to an April 2015 poll conducted by Public Policy Polling, 57% of respondents in the state support changing the law to regulate and tax marijuana similarly to alcohol.

10. Maine – Maine has a relatively high rate of marijuana use, with an estimated 16.24% of residents 12 and older having smoked pot at least once in 2012, the seventh highest rate in the county. In 2013, Portland, the state’s most populous city, voted to legalize possession of small amounts of the drug for adults. While this still goes against state policy, and law enforcement has continued to enforce Maine’s prohibition of the drug, it is a sign of the public’s willingness to make a change. Possession of up to 2.5 ounces of the drug in the state is not punishable by jail time, although there are maximum fines of $600 or $1,000, depending on the amount.

The state legalized medical marijuana in 1999 during a state ballot initiative — the measure passed with 61% of the vote. Possession of a “usable amount” of the drug with a doctor’s notice is legal. In 2009, another initiative passed to allow for medical dispensaries.

11. Delaware – According to a 2014 survey conducted by the University of Delaware, 56% of respondents in the state agreed that “the use of marijuana should be made legal.” Governor Jack Markell signed in June 2015 a law officially making Delaware the 20th state to decriminalize possession of small amounts of marijuana. Though the law will not take effect until January, when it does, Delaware residents will face a maximum penalty of a $100 fine for possession of up to an ounce of the drug. Before the governor signed the law, marijuana users in Delaware faced up to three months of jail time, a $575 fine, and a misdemeanor on their record for the same offence.