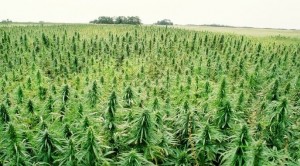 Southern Oregon marijuana growers want to ban industrial hemp production from the region out of fear that hemp may pollinate their crops and render them worthless.

Some outdoor marijuana growers want industrial hemp cultivation to be limited to eastern Oregon – far from their lucrative marijuana crops. At the very least, they don’t want hemp in Josephine, Jackson and Douglas counties.

Compared to Oregon’s marijuana legalization movement, the effort to launch an industrial hemp industry in Oregon has been an understated one propelled by a small but passionate group of advocates. When one of them, Edgar Winters, of Eagle Point, got a permit this month to grow industrial hemp on 25 acres in the heart of the state’s outdoor marijuana growing region, his neighbors were alarmed.

Allowing industrial hemp in an area known for churning out high-grade marijuana could undermine the industry, growers argue.

“You don’t come into the middle of cannabis growing country and try to put up a hemp farm unless you don’t know about it, unless you really don’t know how far hemp pollen can travel,” said Casey Branham, a Jackson County medical marijuana grower who supports industrial hemp but wants it grown elsewhere in the state.

“It basically makes the medicine worthless,” he said.

Branham and his neighbors worry hemp pollen will find its way to their unpollinated female cannabis flowers, known as sensimilla, slowing their growth and leading to seeds. The result: weak, seedy marijuana.

“No one will buy seeded flowers, period,” said Cedar Grey, a Williams medical marijuana grower. “The flower market is so competitive these days. You have to have world-class flowers. Anything that is seeded is reminiscent of the 1960s or pot from Mexico. No one is interested in that at all.”

Hemp and marijuana are different types of the same species, Cannabis sativa. But hemp lacks marijuana’s most coveted component: THC, or tetrahydrocannabinol. In hemp’s case, the gene that fires up marijuana’s high THC production is essentially turned off. So while hemp’s sturdy stalks provide fiber for textiles and its seeds can be added to yogurt and smoothies, the plant is a lousy choice for people seeking marijuana’s high.

Anndrea Hermann, a hemp advocate who lives in Canada and teaches a course on the crop at Oregon State University, said marijuana growers’ concerns are legitimate.

“Is there a risk? Yes, there is a risk to the marijuana growers,” said Hermann, who also serves as president of the Hemp Industries Association and owns a hemp products company. “And I will tell you it’s a hard pill to swallow.”

Winters is the first to obtain a license to grow industrial hemp from the Oregon Department of Agriculture. Another three people have applied, said Ron Pence, operations manager for commodity inspection for the agency, which oversees the state’s new industrial hemp program.

Pence said the agency has authority to limit where some agricultural crops, such as rapeseed, are cultivated. But it does not have that authority when it comes to industrial hemp.

“It would need a legislative fix,” he said.

“Nobody wants one crop to endanger another crop,” he said.

Oregon’s robust outdoor marijuana growing culture sets it apart from places like Kentucky, which also has a state hemp program. Oregon’s outdoor growers are organized, have an attorney and even a lobbyist. While Kentucky’s agriculture officials are enthusiastic boosters of industrial hemp, marijuana remains illegal.

“Marijuana growers are not so vocal” in Kentucky, said Eric Steenstra, president of Vote Hemp, a national hemp advocacy group. “They are not in a position to be able to call up their legislators to ask for a bill protecting their crops.”

Winters, for his part, doesn’t see a major problem cultivating hemp near marijuana crops. He said the growing cycle for hemp is shorter than the one for outdoor marijuana and that an earlier harvest means it would not pose a threat to cannabis.

“It’s been doable all over the world,” said Winters, who’s also a medical marijuana grower. “People have misconceptions about industrial hemp.”

He said marijuana growers need more “education and training and knowledge” about hemp and that he plans to meet with outdoor growers to address their concerns.

He said he’s received strong criticism from marijuana growers and even personal threats since word of his plan spread.

“It’s a viable crop,” he said. “There is no way we are going to be forced out of the county. I can tell you that. We are here to stay.”