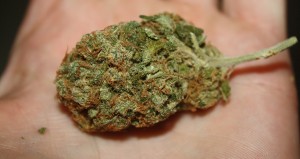 Acapulco Gold, a.k.a. Mexican Sativa – Kicking off our list of the all-time greatest strains is a true native landrace of North America. Often referred to as Acapulco Gold, but more commonly known these days as Mexican sativa, it is often used in breeding projects which have led to numerous world-class strains such as Skunk #1, multiple Haze varieties and even the fabled Blueberry line (check out #11, #10 and #2). And, when grown right, Mexican sinsemilla (meaning “without seed”) can provide one of the best stand-alone sativa highs around.

Girl Scout Cookies – Highest lab-tested THC at a HT Cannabis Cup: 25.14 percent (Denver, 2013) The GSC might be the youngest strain to earn a place on The List. She first appeared just a few years ago, circa 2011, and took the cannabis world by storm. Much controversy still surrounds this strain, however, and not just because of her name. A debate persists as to her lineage: The most commonly held belief is that she’s the product of OG Kush x Cherry Pie, while others contend that it was something called “F1” (not in reference to breeding) x Durban Poison, which was then crossed to Kush. Either way, the GSC has edged out some tough competition to make her appearance here.

White Widow – The White Widow was winning Cannabis Cups in Amsterdam as far back as 1995, and her actual birth date extends to nearly a decade before that. A well-balanced hybrid reportedly made by crossing a Brazilian sativa with an unknown indica from South India, she has both an indica-dominant and a sativa-dominant phenotype. Both phenos are usually thickly coated with trichomes, giving her a very white appearance (and, her name).

Super Lemon Haze – One of only two back-to-back Cannabis Cup champions, the Super Lemon Haze scored her wins in Amsterdam in 2008 and 2009. One of her parents, Super Silver Haze, was the only other strain to achieve this feat, back in 1998 and 1999. The Super Lemon Haze is a true Amsterdam original, created by the breeding giant Green House Seed Company as a cross of Lemon Skunk and Super Silver Haze. The Lemon Skunk half, which is native to the US, brings an overwhelming citrus flavor to the palate. Lab testing has shown extremely high profiles of limonene and terpinolene, making this super-sativa both tasty and potent.

Northern Lights – One of the true all-time greats, the NL #5 was winning Cannabis Cups in Amster- dam way back in 1990. Grown and entered by the Seed Bank (one of the first such enterprises in the world for cannabis seeds), she was later released through the iconic Sensi Seeds and went on to play a role in producing generations of award-winning strains, including Super Silver Haze and Romulan. Another NorCal native, her lineage is unknown, but her taste and influence are not.

Sour Diesel – When grown right, from the true East Coast cut (think AJ — and true connoisseurs know what we mean here), there is simply no better flavor in cannabis. Period. The Sour Diesel reigns supreme on the east side of the United States and will be on The List for eternity.

Super Silver Haze – It’s no coincidence that the Super Silver Haze is the only other back-to-back champion in Cannabis Cup history. Both she and her daughter (Super Lemon Haze, at #18) are nearly one and the same when it comes to killer Haze strains, with the only real difference being the infusion of Lemon Skunk. Bred from superb Haze backcrosses, the SSH has all the true- breeding landrace sativas in her DNA, as well as a quarter NL #5 and a quarter Skunk #1. Make no mistake about it: The SSH was up for the #1 slot and might have gotten there if it wasn’t for the fact that the next three entries to come are…

OG Kush – The Queen of Cali is one of the most popular strains ever to grace the pages of High Times and is hands down the flower of choice on the West Coast of the United States. Not only is she one of the strongest strains on Earth, but she is also among the most varied, exhibiting more phenotypes than almost any other strain we’ve seen and demonstrating that she’s a true product of her environment. When grown well, the OG Kush can take home a Cup in any competition, at any given time anywhere in the world, already claiming dozens of Cups via various OG phenos and crossbreeds. Nearly one out of every three new hybrids that come to market has the OG stamp in their genetic code, almost making the OG its own subspecies within the Cannabis genus. We all owe a debt of gratitude to the OG Kush for helping to usher in the next generation of excellent cannabis lines. Without a doubt, the OG is another strain that will forever be on the list.