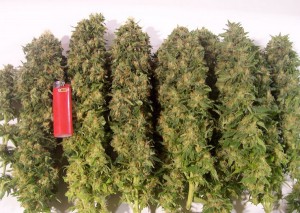 In Texas, a conservative lawmaker filed a bill to completely deregulate marijuana in the Lone Star State Monday, proposing to strike any mention of the psychoactive plant from state law.

The 24-page bill begins: “The following provisions are repealed,” then lists dozens of Texas statutes related to marijuana. If the Legislature were to approve the bill, pot in Texas would be regulated like any common crop.

In a press release, Simpson said he supported regulating marijuana like the state regulates “tomatoes, jalapenos or coffee.”

It’s a markedly different approach to marijuana law reform than other states have adopted. In the last year, blue states Colorado, Washington, Alaska and Washington, D.C., have voted to legalize pot within a detailed framework of taxation and regulation. But it would not be so with Simpson’s bill, which would offer no such restrictions.

In his column, Simpson reflected on his Republican beliefs in small government and individual liberties, and he invoked biblical verse to explain his initiative to repeal marijuana prohibition. He told KETK he wants to “reframe the current marijuana discussion” by talking prohibition repeal in terms of common conservative values.

His perspective resonates with 85-year-old Houstonian Ann Lee, who founded the group Republicans Against Marijuana Prohibition and traveled to Washington D.C. last week to advocate legalization at a conservative political conference.

In June 2014, Lee was one of about 7,000 delegates to the Texas Republican Party convention in Fort Worth, where she spoke in favor of legalizing medical marijuana in the state, citing the benefits it’s provided to her son. But the party voted to oppose marijuana legalization in its official platform.

“It’s the official party position that we don’t favor legalization of marijuana, however it should be noted that a sizable minority voted in favor of allowing medical marijuana usage,” said Steve Munisteri, chairman of the Republican Party of Texas. “It was hotly contested by a sizable number of delegates on both sides.”

Simpson said that many of his Republican peers support repeal of prohibition, and who consider the Drug War an “abysmal failure.”

“The conservative approach—the liberty approach—is to recognize force and violence is not a good way to deal with drug abuse,” Simpson said. “Putting people in prison and teaching them a whole lot about crime, separating them from the family, taking away the breadwinners simply for possessing a plant that God made—that’s wrong.”

Indeed, the number of federal prisoners in the United States has quadrupled since the early 1990s, largely due to a crackdown on drug use. Almost half of all federal prisoners are currently jailed for drug-related offenses.

AJ Lauderback, spokesman for the Sheriff’s Association of Texas said, “we’ll oppose [Simpson’s] bill and any bill that wishes to legalize marijuana in the State of Texas.

He said it was a gateway drug, bore high social costs for drug rehabilitation programs and posed a danger, as users could drive under the influence. But Simpson believes in a small government with a limited role in civilian life.

“We should use out resource in law enforcement to deal with murder, with rape, with theft, but just possessing a substance that God made is not wrong,” he said. “If you use it irresponsibly, then sure. If you drive off the road from marijuana, then sure, but I don’t know anyone who’s run off the road because of marijuana. I do know people who have fallen asleep because they ate too much.”