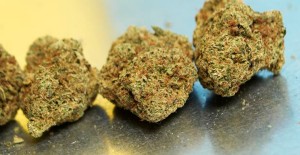 Scientists know that marijuana contains more than 100 compounds, called cannabinoids, that have biological effects on the body. Medically, cannabis can be prescribed for physical ailments like arthritis and cancer symptoms as well as mental health issues like PTSD, depression and anxiety. Still, the role marijuana can play in medicine remains murky. The dearth of research is in large part due to the fact that most studies have focused on illicit use of marijuana rather than its therapeutic potential, and because it’s classified as a schedule 1 drug, making it nearly impossible to study.

Looking for answers about marijuana’s potential mental health benefits, a team of researchers in Canada and the U.S. recently conducted a review of the science. In their report, published in the journal Clinical Psychology Review, researchers found evidence that cannabis can likely benefit people dealing with depression, social anxiety and PTSD, though it may not be ideal for people with bipolar disorder, for instance, for which there appears to be more negative side effects than positive ones. “This is a substance that has potential use for mental health,” says Zach Walsh, an associate professor of psychology at the University of British Columbia. “We should be looking at it in the same way [as other drugs] and be holding it up to the same standard.”

Though more research is needed, studies also suggested that cannabis may have a place in dealing with addiction. “We are really excited about the potential substitution effect,” says study author Zach Walsh, an associate professor of psychology at the University of British Columbia. “If people use cannabis as a replacement for opioid medications, or to get off of opioids or cut back, we could see some pretty dramatic public health benefits. The level of opioid overdoses is so high right now.”

There’s evidence to support that potential. Another unrelated study suggested that pot may even have a place in curbing the opioid epidemic. And yet marijuana can be notoriously hard to study in the U.S. because it’s classified as a Schedule 1 drug, which means it has a high potential for abuse. Many scientists and medical professionals think the classification hampers research, and that marijuana’s medical potential merits further exploration. More studies, research advocates argue, would also help eliminate stigma associated with the drug, paving the way for more and better studies.

Like any drug, pot can have side effects, and Walsh and other researchers argue that for now, all aspects of cannabis need to be further explored, both benefits and potential harms.