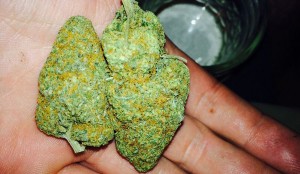 In the U.S., over 29.1 million people are currently diagnosed with diabetes. This is almost 10 percent of the population. Furthermore, two out of three of these people will die from the condition or the many complications that arise from it. This has prompted researchers to look into how medical marijuana can help treat diabetes and its associated complications.

Type 1 diabetes, often termed juvenile diabetes, is a genetic disorder where the pancreas doesn’t produce enough insulin –– a hormone that allows the body to process the sugars from carbohydrates. Sufferers of Type 1 diabetes often take multiple injections of insulin each day. On the other hand, Type 2 diabetes (also known as adult onset diabetes) is a disorder where the body doesn’t process insulin properly, often signaling the pancreas to make more insulin than required. This is the most common type of diabetes.

Medical marijuana has been the focus of several studies examining potential diabetes treatment. One such study, published in the American Journal of Medicine, found that active users of marijuana had a more productive carbohydrate metabolism than people who didn’t use marijuana (Ref. 1). Murray Mittleman, Associate Professor of Medicine at Harvard and author of the study, said, “[Marijuana users’] fasting insulin levels were lower, and they appeared to be less resistant to the insulin produced by their body to maintain a normal blood-sugar level.”

The study comprised over 4,657 men and women participating in the National Health and Nutrition Examination Survey between 2005 and 2010 –– 48 percent had smoked marijuana at least once and 12 percent were current cannabis smokers. The researchers controlled for other factors that might impact diabetes risk, such as gender, income, alcohol use, cigarette smoking and physical activity. Even after these adjustments, the current marijuana users showed fasting insulin levels that were 16 percent lower than those of former users or those who had never used the drug.

These findings are applicable to both types of diabetes. In Type 1 diabetes, a lower fasting level might eliminate the need for an insulin injection at that time. While injections wouldn’t be completely eliminated, it could decrease the number needed per day. For those with Type 2 diabetes, being less resistant to the insulin could help control the advancing of the disease by improving the body’s ability to manage sugar levels naturally.

Some of the complications that can arise from Type 1 and Type 2 diabetes are neuropathy, glaucoma, high blood pressure, and peripheral vascular disease. Medical marijuana has been studied to see its effects on each of these conditions.

Neuropathy, a nerve damage contracted from certain diseases or disorders, is found in 60 to 70 percent of all people with diabetes. More specifically, there are four types of diabetes-related neuropathy: peripheral (located in the hands, arms, legs and feet), autonomic (which affects the nerves that control blood glucose levels, blood pressure, and the heart), focal (specific nerve damage to the head, torso, and leg), and proximal (sometimes called diabetic amyotrophy and usually centralized on one side of the body in the hips, thighs, and buttocks).

Several studies have shown vaporized cannabis to reduce pain and slow the advancing nerve damage of all four types of neuropathy. In some types, there was more than a 30 percent improvement without any significant impact on daily functioning or cognitive abilities (Ref. 2).