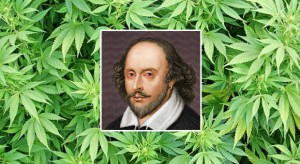 William Shakespeare, perhaps Western literature’s most renowned contributor, might have enjoyed an occasional hit of cannabis, according to a recent study.

Francis Thackeray and his team from South Africa’s University of the Witwatersrand were loaned 24 “tobacco pipe” fragments from Shakespeare’s Stratford-upon-Avon property by the Shakespeare Birthplace Trust. Eight tested positive for cannabis residue and two had remnants of Peruvian cocaine.

Thackeray and his team used an advanced testing technique–called gas chromatography mass spectrometry–to analyze the pipe fragments. The research team suspects that Shakespeare was, in fact, a drug user during his career.

“We were delighted to find indications of cannabis,” Thackeray said. “We can’t be sure that the pipes which we analyzed were those of Shakespeare, but they were from his garden, and they were dated to the early 17th century.”

In an unpublished manuscript, Thackeray suggests that Shakespeare preferred cannabis as a “stimulant which had mind-stimulating properties.”

In fact, Shakespeare’s Sonnet 76 may contain some references to drug use. Throughout its lines, Shakespeare refers to keeping invention in a “noted weed” and to “new-found methods and compounds strange.”

“I had actually begun the project by reading all of Shakespeare’s sonnets,” Thackeray added.

Additionally, the Bard’s use of drugs is actually not that surprising given the experimental nature of Elizabethan medicine. Thackeray and his team suspect that Shakespeare was using the drug as a source of creative titillation.

The results of the study also reveal a bit of information about exploration and exchange between the New World and England during the Elizabethan era.

For example, Peruvian cocaine, akin to the traces found on two of the playwright’s pipe fragments, may have come to England as result of Sir Francis Drake’s visit to the South American nation in 1597.

Shakespeare, if he did use the drug, was likely taking in a product grown quite far from home, one that required a tremendous amount of travel and resources to make its way into his hands.