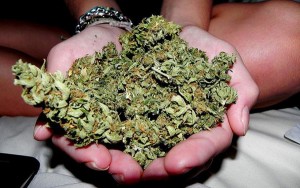 You might not see people smoking pot out in the open but ever since New York loosened its laws on marijuana in late 2014, but more people have been noticing a certain odor in the air.

At Carl Shurz Park near Gracie Mansion, walkers and joggers say they have been smelling pot a lot more now than they used to.

It is the same story on the West Side on the jogging paths, in the parks, or even just walking down the street. To a lot of New Yorkers we talked to, marijuana seems like it is becoming a common sight and smell. Is it because people feel more comfortable to take pot public now that the laws in New York are different?

Speaking before the Public Safety Commission Thursday, Police Commissioner Bill Bratton said marijuana arrests are way down from last year. Part of that has to do with the way the law has changed. Possession of less than 25 grams of marijuana will now get you a fine instead of an arrest.

That is why the DEA has been gradually shifting its focus to harder drugs. Special Agent James Hunt said heroin and opiates are the No. 1 priority for the DEA. Hunt said he noticed a shift in where the pot is being trafficked. Now most of it is coming from inside the United States — in the Northwest, in Washington — as opposed to Mexico or Jamaica.

But Bratton said that doesn’t mean marijuana is any less dangerous. More so, he admitted, on the part of the dealers. He said marijuana was a causal factor in seven murders last year.

While the DEA and Commissioner Bratton wouldn’t say if the new law has emboldened people to smoke pot in the open, Dr. Jeff Gardere, a psychologist, said that as marijuana laws change, so will the attitude of those who might be on the fence about trying it.