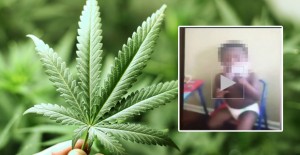 Chicago detectives are investigating a video appearing to show a toddler smoking marijuana.

In the video, the toddler, who is wearing a diaper, is sitting on a chair smoking what appears to be a joint.

The person behind the camera is heard saying “smoke man” and “inhale” while making sounds to show the boy how to inhale the smoke.

The child puts the joint to his mouth at least twice in the video before the man says, “Let me hit that, OK?”