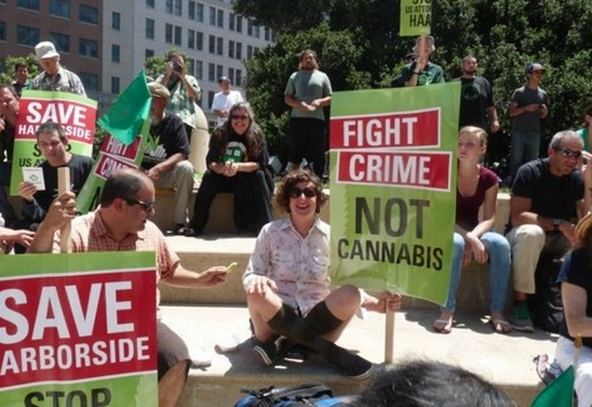 One can just imagine the remarks and jokes regarding a need for Californians to protestPresident Barack Obama regarding amarijuana usage conflict. Anyone who’s ingested the president’s autobiographical piece entitled “Dreams From My Father” knows that Obama was a strong supporter and indulger of the drug in the past. It was in California, in fact, where his book admits that he became a personal fan of the drug.

However, the times – they are-a-changin’. As Obama hit the Bay Area to raise some cash for his presidential campaign at three fundraisers on Monday, hundreds of protesters were gathered for an anti-Obama rally due to Obama’s alleged toughened-policy regarding cannabis, marijuana, grass, weed – whatever you want to call it.

Local businesses protested by putting green flags outside their businesses while the hundreds of protesters took to Oakland, California’s City Hall to stage their protest against Obama.

We are here today to send a message so loud that not even the president will be able to ignore it.

Last fall, the United States Department of Justice began targeting marijuana businesses and this area was hardest hit by the federal government’s crackdown. According to the industry in California and the protesters, the anti-marijuana movement in California’s Bay Area has been attacked extremely hard by U.S. Attorney Melinda Haag.

In 1996, California legalized marijuana for medical use as voters passed Proposition 215. It has been a huge money-making industry for the state since then. However, things have been changing since October 2011 when the government began to crack down on the business operations. The protesters are extremely unhappy with Obama because he previously had promised to keep hands off the business which were in states such as California where medical marijuana is legal – and the protesters say that the president’s promise has not been kept at all.