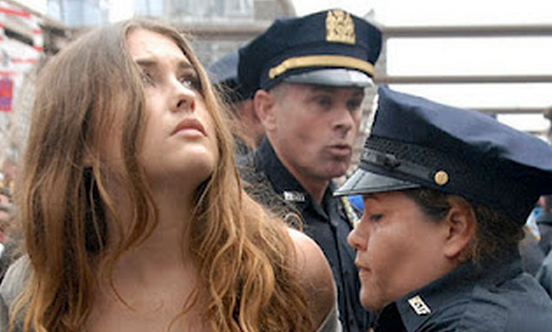 Many of which are allegedly due to illegal searches.

Many of which are allegedly due to illegal searches.

The Big Apple is the marijuana arrest capital of the world. Police arrest 140 people every day in New York City for possessing small amounts of marijuana.

Pot possession has become by far the most common misdemeanor charge in the city. And surprise, surprise — these stop-and-frisk arrests take place predominantly in the city’s minority neighborhoods, with many officers likely violating people’s constitutional rights when they make the arrests.

Current and former cops, defense lawyers and more than a dozen men arrested for the lowest-level marijuana possession told WNYC’s Ailsa Chang that illegal searches took place during stop-and-frisks, which are street encounters carried out overwhelmingly on blacks and Latinos (about 90 percent of the time).

While police claim these stop-and-frisks are to find firearms, what they find much more often is a bag of marijuana. Last year NYPD officers made 601,055 street stops, the first time that number has topped the 600K mark.

Under New York state’s decriminalization law, simple possession of marijuana is a civil violation (with a ticket and fine), but having pot in “public view” jumps the offense up to a misdemeanor (with an arrest).

So what shady New York City cops often do is tell suspects, “Show me the marijuana,” and when they pull it out, they’re charged with “pubic display” and arrested.

Antonio Rivera, 25, said he gets stopped by the cops up to five times a month. In January, Rivera said he was stopped and frisked in the Bronx, and was then arrested for misdemeanor marijuana possession. Critics of the police say his case is an example of how officers may be conducting illegal searches when making marijuana arrests.
According to Rivera, his marijuana was in his pants and police pulled it out of his clothes after searching him without his consent.

“So they checked my pockets, my coat pockets, and they patted my jean pockets,” Rivera said, “and then once he felt the package I had in my crotch area, he went into my pants and pulled it out.”

Rivera had put a Ziploc bag of marijuana between his legs inside his plants while still in the room where he bought it. He said he never took the pot out when he went outside, but the police officer who arrested him told prosecutors Rivera was “openly displaying” his cannabis.

In the criminal complaint, the arresting officer claimed he “observed the defendant to have on his person, in his right hand one ziplock bag containing a dried-green leafy substance with the distinctive odor alleged to be marijuana in public view.”

It’s impossible to know exactly how many illegal searches take place every year, since police officers typically aren’t too attached to the truth when it makes them look bad.

In a written statement to WNYC, police spokesman Paul Browne admitted that illegal searches do happen. Browne claimed that officers get disciplined when the department finds out.

“If an officer conducted an improper search, he is instructed on how to do it properly; unless it was particularly egregious in which case he would face more severe disciplinary action,” Browne said.