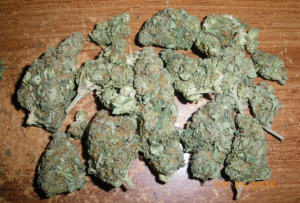 Less than two weeks after sales of recreational marijuana kicked off in Nevada, stores are running out of pot to sell, according to the state’s Department of Taxation.

On Friday, Gov. Brian Sandoval endorsed the department’s call for a “statement of emergency,” which would allow for more licensed distributors, the Reno Gazette-Journal reported.

Nearly 50 dispensaries in the state have licenses to sell marijuana for recreational use. Those sales got underway on July 1.

But those same retailers do not legally have the authority to restock their inventories.

Alcohol wholesalers have the exclusive rights to move marijuana from growers to retailers in Nevada, as part of a temporary court order that was extended in June by a Carson City district judge. The rule aims to “promote the goal of regulating marijuana similar to alcohol” — and protect liquor stores from losing business as the demand for recreational marijuana rises.

Nevada is the only state with legal marijuana that has such an arrangement.

As of Friday, the Department of Taxation had issued zero distribution licenses to alcohol wholesalers, because of incomplete applications and zoning issues, the Reno Gazette-Journal reported.

Dispensaries started selling the marijuana they had in stock on July 1. Several establishments told state officials they expected to run out in the coming days.

statement of emergency could bring relief. The regulation would allow the department to issue distribution licenses to a larger pool of applicants, including those outside the alcohol business. The Nevada Tax Commission is expected to vote on the regulation on Thursday.

Stephanie Klapstein, a spokeswoman for the Department of Taxation, told the Reno Gazette-Journal that a collapsed marijuana market would have far-reaching consequences. A 15% tax on the cultivation of marijuana generates revenue that the state spends on public education.

“A halt in this market will lead to a hole in the state’s school budget,” Klapstein said.

Residents and tourists who are 21 and over can buy up to an ounce of marijuana or one-eighth of an ounce of edibles or concentrates — but only while supplies last.