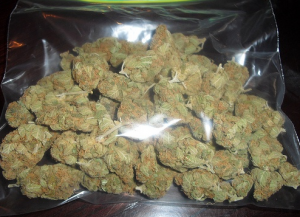 The Easter bunny left an unwanted surprise inside a present for a toddler in Otis, Ore. on Sunday when the family found three bags of marijuana inside a packaged toy.

The mom told KATU News her daughter’s toy was purchased at the Newport Walmart store over a week ago.

When the family opened it up on Easter morning, she said they found some of the pieces missing – and some baggies of pot instead.

“I was shocked, at first I was like, I kind of laughed and was like oh my gosh, I cannot believe this even came out of there,” said Christina Marie Hannahs.

She found the second and third bags when she put the box away, so that her daughter couldn’t get to it.

“She ended up going for the box. And once she grabbed the box, the box rolled over and two more small bags fell out of it,” Hannahs said.

Hannahs believes the gift she bought at had been returned to the store by someone else.

The mom told KATU News that a police report has been filed.

“At Walmart we are committed to providing our customers a safe and secure shopping environment. We are actively reviewing this matter and will work with the customer and local authorities to determine what happened.”